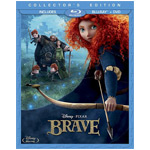 It’s a big Pixar week on the home entertainment front as the studio’s acclaimed summer hit Brave and its Short Films Collection Vol. 2 become available on Blu-ray and DVD this Tuesday (Nov. 11). Directed by Mark Andrews and Brenda Chapman, this lavishly animated feature centers on the red-haired Scottish Princess Merida who courageously sets out to save her mother from a terrible spell. While it garnered a 78% rating on Fresh Tomatoes (some critics found the pic to be too traditional and predictable), it went on to make over $534.4 million at the box office worldwide and is one of this year’s top Oscar contenders.

The Blu-ray disc features commentary by director Mark Andrews, co-director Steve Purcell, story supervisor Brian Larsen, and editor Nick Smith, the short films La Luna and The Legend of Mor’Du, and eight behind-the-scenes featurettes that (total of 50 minutes). The extras include four extended scenes, an alternate opening, and a few other minor featurettes. The 3-disc collectors Blu-ray/DVD can be yours for about $20 on amazon, while the DVD is priced at $15 on the site. The five-disc Ultimate Collector’s Edition, which includes the 3-D version, Blu-ray, DVD and digital copy sets you back about $30.

Also on our must-have list this week is the Pixar Short Films Collection 2. This lovely anthology features shorts that are continuations of some of the Pixar features such as Your Friend The Rat (Ratatouille), BURN-E (WALL.E), Dug’s Special Mission and George & A.J. (Up), Hawaiian Vacation and Small Fry (Toy Story) and Time Travel Mater (Cars 2) as well as stand-alone festival favorites such as Partly Cloudy and the Oscar-nominated Day and Night, La Luna and Presto. The release also features audio commentary and student films by John Lasseter, Andrew Stanton and Pete Docter. The Blu-ray is priced at about $28 on amazon, while the DVD can be yours for $20. 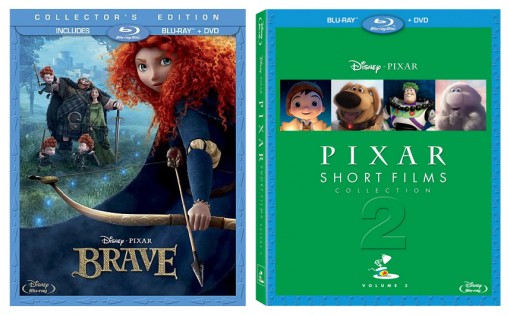