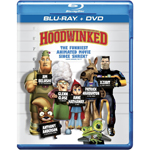 A modern take on classic fairy tales and a slew of classic TV toons are reason enough to fall in love with your DVD or Blu-ray player all over again this Valentine’s Day week.

Getting the high-definition treatment for the first time is Hoodwinked (The Weinstein Co., $24.99 Blu-ray/DVD combo pack). The 2005 feature is getting a sequel, Hoodwinked, Too! Hood vs. Evil, due out at the end of April, so this is a good chance to catch up.

If you thrilled to the battles between He-Man and Skeletor, you’ll be sure to want a peek at He-Man & the Masters of the Universe: Season 1 (Digital1Stop, $29.98).

You may also like...
Related Topics:He-Man and the Masters of the Universe, Hoodwinked, Hoodwinked Too, Johnny Test, Paddington Bear, Sabrina the Animated Series, The Weinstein Co