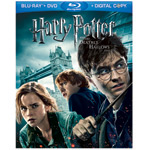 It’s a big day for Muggles and Pixar fans alike, with the arrival of most recent Harry Potter movie and the high-def debut of The Incredibles.

Up first on April 15 is Harry Potter and the Deathly Hallows: Part 1 (Warner Bros., $28.98 DVD, $35.99 Blu-ray), the penultimate chapter in the popular series. Adapting the book by J.K. Rowling, the release features deleted scenes and Blu-ray exclusive features including the opening scene of Part 2, some magical featurettes, a look at the soundtrack for the film and a promotional trailer for the opening of the Wizarding World of Harry Potter.

Another Pixar classic is getting a re-release, with a new edition of Cars (Disney, $39.99 Blu-ray and DVD combo pack) in preparation for the June 24 of Cars 2.