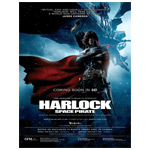 Produced by Toei Animation and directed by the helmer behind Fullmetal Alchemist Brotherhood, Halo Legends and Appleseed Saga: Ex Machina, the feature-length adventure follows the mysterious space pirate of the future, Captain Harlock, who is determined to return his death ship and loyal crew to a battered Earth, declared off-limits by the intergalactic Gaia Coalition. The rogue captain comes up with an incredible plan to go back in time to rescue Earth, but that involves destroying everything that currently exists. A young Gaia Coalition soldier infiltrates Harlock’s ship, but soon discovers things are not as they seem.