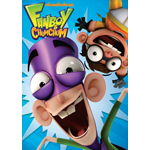 Also out this week is the first-ever DVD release for Nick’s hit series Fanboy and Chum Chum (Nickelodeon, $16.99). The release includes eight episodes from the show’s first season. Bonus features include six Fanboy and Chum Chum shorts and the pilot episode of the series Planet Sheen.