Exclusive to the limited edition four-disc set is the highest possible quality version of the film, in stunning 4K UHD, as well as the full-length feature and standard bonus features on Blu-ray, an additional Blu-ray disc dedicated to the feature-length documentary The Making of Weathering With You, as well as the film’s soundtrack on CD, a 104-page perfect bound book, a mini poster and decal sticker, all in a beautiful hard case designed for collectors.

Additional bonus features on the feature film’s Blu-ray disc include an interview with director Makoto Shinkai, the “Weather Front” featurette, a talk show interview with Shinkai and journalist Yumiko Udo, director filmography featurette and trailers & TV spots. Weathering With You (Collector’s Edition) will be available for a suggested retail price of $79.98.

Preorders are open now at ShoutFactory.com.

From the director and creative team, including producer Genki Kawamura, behind the critically-acclaimed, global smash hit Your Name., Weathering WIth You features music from the hit band RADWIMPS and an all-star voice cast including Lee Pace (Guardians of the Galaxy, The Hobbit Trilogy), Alison Brie (GLOW, The LEGO Movie franchise) and Riz Ahmed (Rogue One: A Star Wars Story, Venom). Shinkai has once again brought incredible beauty and a powerful story to the screen.

Weathering With You will also be released on September 15 on Blu-ray + DVD and SteelBook, and digitally on August 4. Details here.

For the complete Weathering With You (Collector’s Edition) UHD experience, viewers will need a 4K Ultra HD TV with HDR and a UHD Blu-ray player. 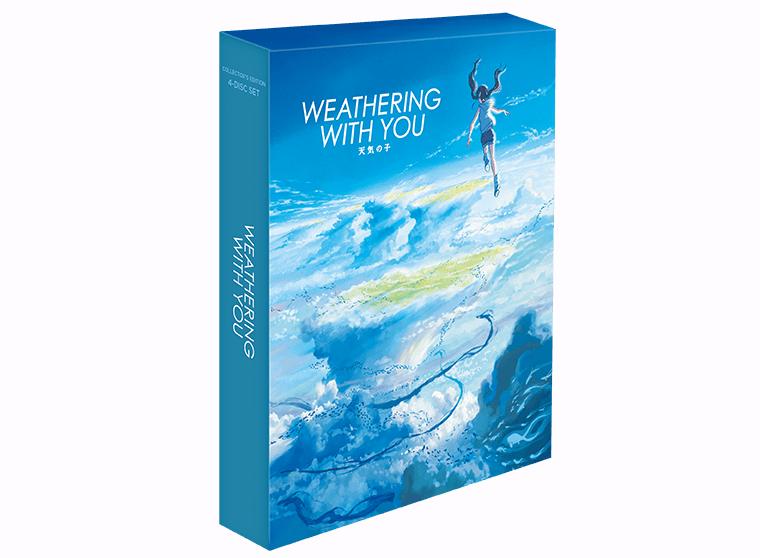 Weathering With You UHD Blu-ray