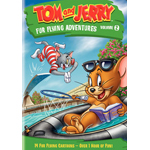 Up first is Transformers — The Japanese Collection: Headmasters (Shout! Factory, $29.96), offering a unique look into the original animated series that spawned the current box-office king feature film Transformers: Dark of the Moon.

And if giant robots in Japan is your thing, there’s also Mobile Suit Gundam OO: Wakening of the Trailblazer (Bandai Entertainment,$24.98 DVD, $34.98 Blu-ray) to check out.