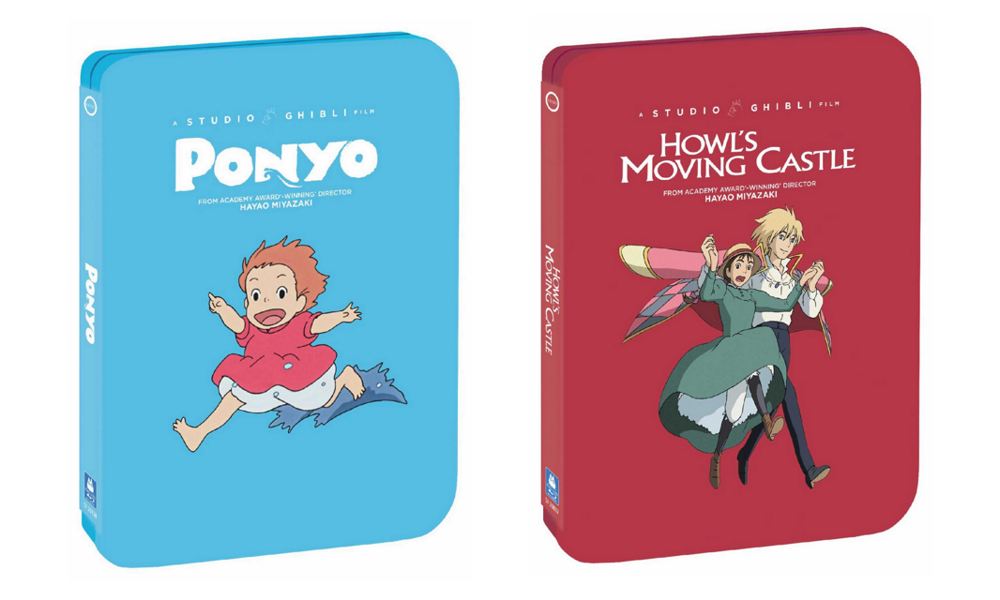 Studio Ghibli and GKIDS, with distribution by Shout! Factory, will release Howl’s Moving Castle and Ponyo from the famous Japanese studio’s library of films, on May 12 in limited edition SteelBook packaging with striking new art. The debut North American SteelBook releases will house Blu-ray & DVD combo packs, presenting the films alongside hours of bonus features and a booklet with stunning art and statements from the filmmakers.

From the legendary Studio Ghibli, creators of Spirited Away, and acclaimed director Hayao Miyazaki, comes the Academy Award-nominated fantasy adventure for the whole family.

Sophie, a quiet girl working in a hat shop, finds her life thrown into turmoil when she is literally swept off her feet by a handsome but mysterious wizard named Howl. The vain and vengeful Witch of the Waste, jealous of their friendship, puts a curse on Sophie and turns her into a 90-year-old woman. On a quest to break the spell, Sophie climbs aboard Howl’s magnificent moving castle and into a new life of wonder and adventure. But as the true power of Howl’s wizardry is revealed, Sophie finds herself fighting to protect them both from a dangerous war of sorcery that threatens their world.

From the legendary Studio Ghibli, creators of Spirited Away and My Neighbor Totoro, and Academy Award-winning director Hayao Miyazaki, comes a heartwarming family adventure.

When Sosuke, a young boy who lives on a clifftop overlooking the sea, rescues a stranded goldfish named Ponyo, he discovers more than he bargained for. Ponyo is a curious, energetic young creature who yearns to be human, but even as she causes chaos around the house, her father, a powerful sorcerer, schemes to return Ponyo to the sea.