DreamWorks Animation showed they had big plans for the Jay Ward properties earlier this year with the release of the Mr. Peabody & Sherman feature film. Now, with the film coming Oct. 14 to home video formats, owners of the 3D Blu-ray edition will have a chance to see a new short starring Ward’s beloved moose and squirrel.

The new Rocky and Bullwinkle short is directed by Gary Trousdale, whose helming credits include Beauty and the Beast, The Hunchback of Notre Dame and Atlantis: The Lost Empire, and produced by Denise Nolan Cascino from a script by Robert Ben Garant and Thomas Lennon of Reno 911! fame. Of course, the irreplaceable June Foray returns to voice Rocky, with Tom Kenny voicing Bullwinkle. Jay Ward’s daughter, Tiffany Ward is executive producing.

The five-minute short features the notorious Boris and Natasha coming up with a new tactic for destroying moose and squirrel — create a beautiful female Moose-bot for Bullwinkle to fall in love with, creating a split between the lifelong pals.

Ward’s characters seem to still be very much in the zeitgeist, with the Paley Center for Media in Beverly Hills hosting an opening gala Oct. 6 for its Jay Ward Legacy Exhibit, which runs through December.

But back to the short: We caught up for a brief chat with Trousdale and Ward about the project.

Animation Magazine: Tiffany, what would your father think of the CG-animated versions of his characters?

Tiffany Ward: My dad would have been elated because he hated the animation (on the original show). He really wanted it to be so much better, but when he signed the deal, he didn’t realize the budgets were that low. So they were forced to do offshore animation in Mexico and they didn’t know how to animate. They said they did. He was horrified. He even paid his own money to bring a few episodes back to animate a little bit better. So he would have looked at this as maybe the greatest facelift ever after 55 years of his characters, and they look so good now. It is the characters as they really were, in essence, but they look much better and they’re talking about more modern things, obviously, but it’s still the essence of Rocky and Bullwinkle, exactly, and it’s as funny as the original shows, which is a great tribute.

Animag: Why bring them back now?

Gary Trousdale: My question is: Why haven’t we been doing this all along? They’ve been great characters; they’re still funny. We had a panel at Comic-Con and some girl said, “What are you going to do now that the Cold War is over?” Who cares!

Ward: It seems to be back, the Cold War.

Trousdale: But I have noticed that, above all other studios, the producers of the modern versions of older cartoons, the Jay Ward characters have maintained that integrity, if you will. Look at Tom and Jerry, for example. They’re best friends now, they go solve problems together. But the Jay Ward stable really has stayed the same.

Ward: That was my goal, was to caretake for my father, was to see that his principles would be followed and that his characters would stay true to themselves. So thank you, that’s a compliment.

Animag: What’s next for these characters? Is a feature possible? What about other Ward characters?

Ward: We have an option with DreamWorks on Rocky and Bullwinkle, so just cross your fingers. And to answer that other question, I’ve always pitched the idea of putting one of our characters’ shorts in front of a theatrical movie. For instance, in front of an Adventures of Rocky and Bullwinkle feature we would have Fractured Fairy Tales. I think that we found the perfect script (for this short), which is really interesting because in the late 1990s and early 2000s, we interviewed many of the old writers — and nobody wanted to touch the property. Nobody thought that they could do it justice. So we couldn’t even get writers. Now, we have Tom Lennon and Ben Garant, and they were big fans and they wrote this amazing script.

Animag: How did they become involved in this?

Trousdale: DreamWorks was looking to get ahold of them for a while. And when we came on this project — I had been working on it a little bit with one of the development executives — and we wrote a dozen little one-paragraph outlines. Maybe they could do this. Maybe they could do that. And we’d pick the top three and shoot them by these guys and see if they’re interested, entice them into the studio.

Ward: (DreamWorks Animation) considers us a franchise. They don’t own us; it’s a licensed arrangement. We work under the title of Bullwinkle Studios.

Trousdale: They have a love for it.

Animag: You have some great voice talent in the short. How did you cast the parts? Did you make people read for it?

Trousdale: Yes. It was like when I started back in features — you have the character first and you bring in a bunch of people who would hopefully sound like what you wanted it to sound like. So we had multiple reading for a single part and we would pick the ones we thought sounded the best, so it really was a casting process, it wasn’t a casting director saying, “You know, Tom Cruise would love to do this.”

Animag: Except, of course, for June Foray, right?

Trousdale: Right! Other than June, of course. 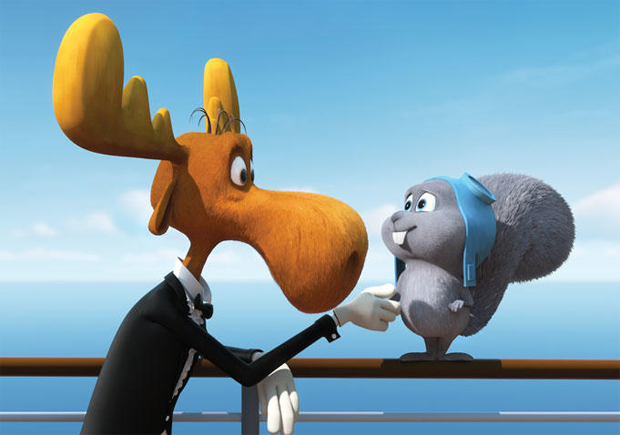