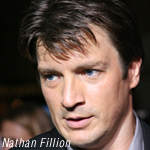 Nathan Fillion and Elisabeth Moss have been cast as the lead voice actors in Green Lantern: Emerald Knights, the next DC Universe animated original movie.

Fillion currently stars in the ABC series Castle and voiced the role of Steve Trevor in the Wonder Woman animated DVD feature.

Moss plays the role of Peggy Olson on AMC’s acclaimed series Mad Man and previously had a role as President Bartlett’s daughter on The West Wing.