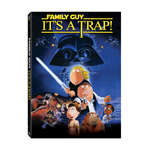 It’s a battle of the sci-fi funny bones this week in home entertainment, as  Seth MacFarlane and company parody Return of the Jedi while the most-recent volume of Matt Groening’s Futurama also takes off.

In Family Guy: It’s a Trap! (Fox, $22.98 DVD, $29.99 Blu-ray), the circle is completed as the Griffin clan relives the last chapter in the Star Wars saga in its own unique way. The original feature includes plenty of guest voices from Patrick Stewart, Michael Dorn, Adam West, Carrie Fisher and Rush Limbaugh as the voice of the Sarlaac. The disc also is available in a trilogy gift pack titled Laugh it up, Fuzzball!: The Family Guy Trilogy (Fox, $34.98 DVD, $39.99 Blu-ray)

Futurama Vol. 5 (Fox, $29.98 DVD, $39.99 Blu-ray) includes 13 episodes from the recently revived series. The set includes audio commentaries; featurettes such as “Bend it Like Bender”, “Previously On…”, “Fry’s Crudely-Drawn Comic Book – The Crudely Animated Edition” and “Behind the Fungus: Makin’ a Hit Song.”

You may also like...
Related Topics:Family Guy, Futurama, It's a Trap, Laugh it up Fuzzball, Matt Groening, Return of the Jedi, Seth MacFarlane, Star Wars