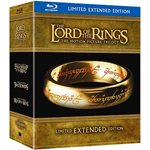 Fans of Middle Earth can put the final touches on their high-def home video collection.

Out this week for the first time on high-definition disc is The Lord Of The Rings: The Motion Picture Trilogy – Extended Edition (New Line, $119.98). This 15-disc set features the entire trilogy and is packed with hours of extras for the ultimate experience for fans of Peter Jackson’s amazing, Oscar-winning trilogy.

Also out this week is a pair of releases devoted to the popular 1990s CG-animated series Reboot, with fans able to complete their collections with either Reboot: Seasons 3 and 4 (Shout! Factory, $19.93) or the Reboot: Definitive Mainframe Edition (Shout! Factory, $69.99).