To take your troll-stravaganza to the next level, opt for the Trolls Party Edition Blu-ray (Feb. 7), which offers four exclusive Party Mode features wherein you use your remote to engage with the fun on screen – shower the screen with glitter during party scenes, drop cupcakes when things get scary, high-five Cloud Guy, join Mr. Dinkles for “Oh snap!” moments, and more.

Directed by Shrek franchise vets Mike Mitchell and Walt Dohrn, the movie starts out in the colorful Troll Village — home to a society of optimistic Trolls who love to sing, dance and party. When the comically pessimistic Bergens invade, Poppy (Anna Kendrick), the happiest Troll ever born, and the overly-cautious, curmudgeonly Branch (Justin Timberlake) set off on an epic journey to rescue her friends. Their mission is full of adventure and mishaps, as this mismatched duo try to tolerate each other long enough to get the job done.

+ Party Mode – Sing, dance and laugh along with the Trolls in this engaging, interactive feature.*

+ Creating Troll Magic – Trolls Production Designer Kendal Cronkhite-Shaindlin leads a kid-friendly exploration of her role as production designer on the film before highlighting four key stages of creating the animation with detailed visuals of each stage.

+ Troll 2 Troll – Poppy and Branch have a friendly debate on important topics such as “Cat vs. Dog.”*

+ Inside the Bunker – An in-depth exploration of Branch’s “special” place, narrated by Cloud Guy.*

*Available on Blu-ray and Digital HD only 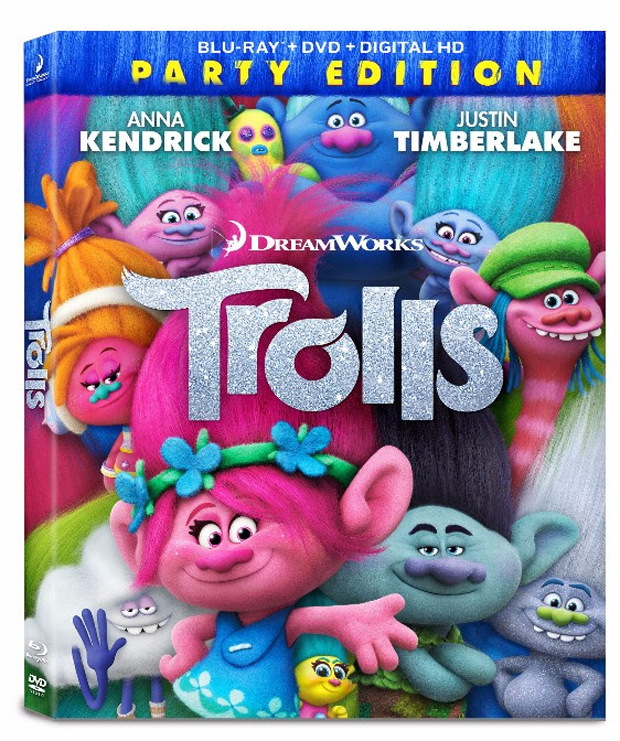