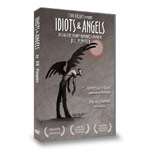 The dog days of summer may be ruling on TV, but there are plenty of new, exciting toons debuting on DVD and Blu-ray this week. First up, Bill Plympton’s wonderful  movie Idiots & Angels (Passion River, $19.99), which was completed in 2008, but had its limited release in 2010 and is finally available today (August 16) on DVD. This dark, dialogue-free comedy centers on a morally bankrupt man who struggles with a magical pair of wings that have sprouted out of his back and foil his greedy plans. The indie animator has said that he wanted the 78-minute-long Idiots to be in stark contrast to his previous movie Hair High, but the movie certainly carries Plympton’s familiar wit, intelligence and attention to detail. Corey Burton provides the pic’s memorable original music. Amazingly enough, Plympton made this hand-drawn indie with an estimated $125,000 budget.

Also surfacing on DVD and Blu-ray today is last year’s charming, BAFTA-winning and Oscar-nominated special The Gruffalo [NCircle, $9.99]. Directed by Max Lang and Jakob Schuh, this CG-animated BBC Special is based on the 1999 book by Julia Donaldson and illustrated by Axel Scheffler. The half-hour Magic Light Pictures/Studio Soi production tells the story of a clever mouse who uses his wits to fend off forest predators by inventing an imaginary beast. The all-star U.K. cast includes Robbie Coltraine, John Hurt, Helena Bonham Carter and Tom Wilkinson.

Here is The Gruffalo trailer:

The week’s other hot new titles include: