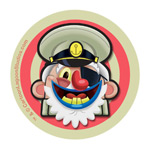 New York-based animation veterans Manny Galán & Pat Giles know their toons! They are the type of creative guys who have a deep passion for all forms of animated projects—even the goofy, low-budget ones that haunt the strange corners of public domain and pop culture. So, it’s not surprising that their first big venture, Captain Cornelius Cartoon’s Cartoon Lagoon pays homage to the old-school children’s shows that aired on Saturday mornings when they were growing up.

As Giles, whose animation credits include shows such as Disney’s Doug, PB&J Otter, Daria, Sheep in the Big City and Codename: Kids Next Door explains…

“It is a very unique fusion of puppets and animation. Our characters are trapped in a cartoon-retrieving submarine that explores a lagoon, where all of these public domain cartoons are dumped.” Giles says the idea for the show came from Galan. “There a legend about an E.T. Atari game that sold so poorly, that it was dumped into a landfill. Manny said what if there was an actual lagoon, full of abandoned cartoons, VHS tapes, DVD’s, kinescopes, etc., just floating there to be plucked out and watched again?”

Galan, who met Giles when they were both working on animated General Mills cereal commercials, adds…

“You know I love to work with my friends. We worked on a self-published comic books and designed a toyline. With Cartoon Lagoon, it started out as a goofy thing we were doing, and it started to look better and better and more friends wanted to get involved.”

One of the great things about the Cartoon Lagoon experience is that you never know who or what is going to pop up. There might be some classic tales featuring Casper the Friendly Ghost and Popeye the Sailor or some hipster indie animated shorts (Life in the Analog Age by Gabe Swar or President of the Universe by Mike Carlo) or a visit from The Gregory Brothers or Fairly OddParents creator Butch Hartman.

“Butch does a PSA warning kids about the dangers of music,” says Galan. “It’s all about recapturing the Saturday morning experience. Kids don’t have the sense of appointment TV anymore, so this was our chance to recreate that sense of place for them and to offer that block of curated TV for the viewers.”

Giles says he was very excited about the reaction of the fans at the TV festival and at the New York Comic-Con.

“Some students stopped by and wanted to know how we were able to create such natural-looking animation,” he says. “I had to tell them that they are actual puppets (created by Julia Rosner) sewn together by human beings. We shot the puppets live in the basement of a Catholic girls school in the lower East Side of New York City. We put tracking marks on the puppets’ faces. The facial animation was done in Flash, and then we added the tracing mo-cap plug-ins, composited laboriously to the faces. We thought it would be easy, but it wasn’t really a short cut! So that’s how we got the unique look! We ended up using everything.”

Giles and Galan cite a wide variety of influences—from Thunderbirds and Howdy Doody to the imaginative shows of Sid and Marty Krofft and the hilarious riffs of Mystery Science Theater. They also say they’re hoping the fact that the two-hour Cartoon Lagoon DVD is now available on amazon will help generate more word of mouth about their project.

“We’ve been talking to a bunch of folks at different studios about it, but we didn’t want to take the project to them before it was finished,” says Giles. “We’re not quite South Park, and not Disney—but you can safely watch our show with the kids. We didn’t want to get all these notes and have anyone tell us how to do it. We figured we wanted it to be the best show we could make before we pitched it to anyone!” 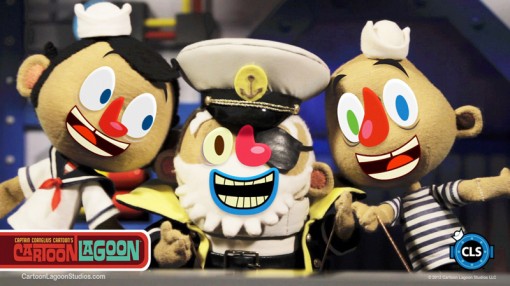