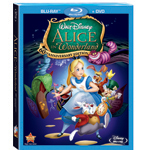 The classic Disney version of Alice in Wonderland is turning 60 – and it looks better than ever with its first-ever high-definition home video release.