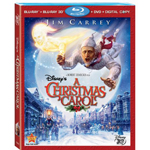 Just in time for the start of the holiday season is Disney’s A Christmas Carol (Disney, $29.99 DVD, $39.99 Blu-ray/DVD combo pack, $49.99 3D Blu-ray), directed using motion-capture technology by Robert Zemeckis and starring Jim Carrey as Ebenezer Scrooge. Each version is packed with bonus features, including a 3D Blu-ray exclusive Mr. Scrooge’s Wild Ride. The Blu-ray edition features a behind-the-scenes look at the film, an interactive Christmas calendar and deleted scenes, all in addition to DVD bonus features that look at the creative process behind the movie and follow one of the film’s young stars around the set.

One of the most-anticipated releases of the year hits this week with Avatar Extended Edition Collector’s Set (Fox,  $34.98 DVD, $54.99 Blu-ray). Each edition will contain the original theatrical version, the special edition re-release version seen in theaters last summer and the collector’s extended cut that features an extra 16 minutes of footage and an exclusive alternate openings. Each also features a family audio option that removes the objectionable language. Bonus features on the Blu-ray include a feature-length documentary on the making of the film, more than 45 minutes of deleted scenes,  production materials and more.