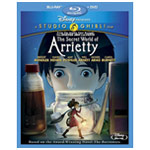 Walt Disney Studios will be releasing three hit traditionally animated features from Japanese toon house Studio Ghibli on Blu-ray May 22—The Secret World of Arrietty, Castle in the Sky and Whisper of the Heart.

Released this past February in U.S. theaters, Arrietty is a modern take on Mary Norton’s classic The Borrowers, directed by Hiromasa Yonebayashi based on a screenplay by Hayao Miyazaki. Gary Rydstrom directed the North American dub, which stars Bridgit Mendler, Will Arnett, Amy Poehler, Moises Arias, David Henrie and Carol Burnett. The two-disc Blu-ray combo pack will retail for $39.99 and include a storyboard version of the film, original Japanese trailers and commercials and music videos featuring performances by Mendler and theme composer Cecile Corbel.

Castle in the Sky (Hayao Miyazaki) and Whisper of the Heart (Yoshifumi Kondo) are also available for the first time on Blu-ray with the stunning hand-drawn animation brought to life with new digital masters of the film. Both will be available as 2-Disc Blu-ray + DVD sets for $39.99.

The Secret World of Arrietty, Castle in the Sky and Whisper of the Heart