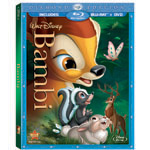 Disney has opened its vault once again to release the beloved classic Bambi on Blu-ray.

Also out this week is the live-action direct-to-video feature Scooby-Doo! Curse of the Lake Monster (Warner Bros., $27.95 DVD, $35.99 Blu-ray), based, of course, on the classic Hanna-Barbera animated series.