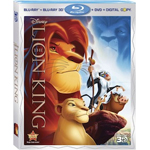 The Walt Disney Co. will release at least 15 films in the Blu-ray 3D format in 2011, including such animated classics as The Lion King and Beauty and the Beast — both of which will be seen in stereoscopic 3D for the first time.

The studio also will release in the format its recent hits Tangled and Tron: Legacy, as well as catalog titles Bolt, Meet the Robinsons, Tim Burton’s The Nightmare Before Christmas, G-Force and Chicken Little.

Specific dates for each release were not immediately available, though the release finally answers the question of when fans will get to see the long-awaited 3D conversion of Beauty and the Beast, which was originally scheduled for a theatrical release last year. The Lion King also is making its 3D debut on Blu-ray.

The films will be released day and date with other home video formats and each also will include the 2D Blu-ray version in addition to the 3D.

“As our contemporary library of 3D content continues to grow, and the original artists and filmmakers meticulously ‘dimensionalize’ their work for release on the Blu-ray 3D format, we will be offering movie-lovers the most incredible in-home entertainment experience they will ever have,” said Lori MacPherson, executive VP and GM of Walt Disney Studios Home Entertainment. “In addition to offering new releases day-and-date in 3D and further cementing our leadership in the marketplace, we’re thrilled that consumers will have the exclusive Blu-ray 3D experience of two of the most celebrated Disney animated features, The Lion King and Beauty and the Beast, in their homes.”

Nick Orders Season 9 of ‘SpongeBob’; Series to Surpass 200 Episodes
Ricky and Rocky Laugh it Up on DVD