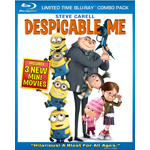 A pair of animated features debut this week on home video, making a perfect last-minute stocking stuffer for animation fans of all ages.

Tuesday sees the release of Despicable Me (Universal, $29.98 DVD, $39.98 Blu-ray/DVD combo pack, $49.98 3D Blu-ray), the first animated feature release from Illumination Entertainment. A hit with critics and audiences, the DVD and Blu-ray editions are packed with special features, including commentary, three new short films starring those lovable little yellow minions, a featurette on the voice cast and a “Super Silly Fun Land” game. Exclusively  on the Blu-ray editions are picture-in-picture windows showing behind-the-scenes footage and interviews as the movie plays, recipes for Miss Hattie’s cookies, BD Live features, a Minion Me app for iPhone and iPad, and more.

Here’s one more look at the trailer for Despicable Me:

And here’s a peek at the Minions’ mini-movie, Banana.

Dropping on Friday is Legend of the Guardians: The Owls of Ga’hoole (Warner Bros., $28.98 DVD,  $35.99 Blu-ray, $44.95 3D Blu-ray), directed by Zack Snyder of 300 and Watchmen fame. The lushly animated fantasy adventure film is packed with plenty of features including behind-the-scenes featurettes, the Looney Tunes short Fur of Flying, interactive challenges, art galleries, a music video and more.

You may also like...
Related Topics:3D Blu-ray, Blu-ray, Despicable Me, DVD, Legend of the Guardians The Owls of Ga'hoole, Naruto