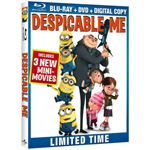 Universal has unveiled a new points-based reward and social marketing program to promote the Dec. 14 release of Despicable Me on DVD and Blu-ray.

The program lets fans earn points and sweepstakes entries through online and offline activities, with prizes ranging from a lifetime all-access pass to Universal Studios theme parks, a trip to New York for the 2011 Macy’s Thanksgiving Day Parade and trips to Los Angeles that include hotel stays and spa treatments.

The studio has released several clips and a trailer to promote the project. Full details on the promo in the press release, after the clips.

Julie Andrews Talks About the Minions

Miranda Talks About the Minions

Blu-ray™ and DVD Release of Despicable Me

Universal City, California, November 9, 2010 – In celebration of the highly anticipated home entertainment release of the animated comedy blockbuster Despicable Me, Universal Studios Home Entertainment is launching “Minion Madness,” a groundbreaking points-based reward and social marketing program spotlighting the film’s endearingly mischievous characters, from now through January 2011. The program enables fans to earn points and participate in up to 25 sweepstakes entries each day through a variety of online and offline activities. Despicable Me has earned over $500 million worldwide and will be released on Blu-ray™ Combo Pack, Blu-ray™ 3-D Combo Pack, DVD Double Pack, DVD and digital download on December 14, 2010.

“Despicable Me is the event release of this holiday season, which also makes it the perfect movie to engage fans on social platforms like Facebook and mobile apps,” said Hilary Hoffman, Executive Vice President of Marketing, Universal Studios Home Entertainment.  “Minion Madness is designed to deliver a unique experience that is both interactive and entertaining, ensuring that audiences of all ages have the opportunity to enjoy Despicable Me in a fun and memorable way throughout the holidays.”

Fromgift cards to all-expense paid family vacations, “Minion Madness” will award more than 15,000 prizes. Each week, gift cards in $10, $20, $35 and $50 increments will be awarded to winning players. In addition, three once-in-a-lifetime sweepstakes Grand Prizes will be awarded:

Once officially registered online as “Masterminds” on www.minionmadness.com, players earn chances to win prizes by participating in an array of entertaining and creative challenges, ranging from online games and videos to mobile activities to create, share and rate personalized Despicable Me content. For each activity completed, players are rewarded with their very own, ever-expanding personal army of online Minions. As the total number of Minions grows, so does the player’s

chances of winning weekly and monthly prizes. The prizes also increase in value with each new

Minion population benchmark level reached, escalating to as many as a whopping 100 $50 gift cards every week.

In addition, iPhone-equipped players can participate in a special “Minion Photo Madness” event, a series of nationwide photographic missions, using a new Augmented Reality iPhone app available in mid-November.  Players gain points and grow their Minion armies by photographing a series of designated landmarks around the country and personalizing their photos with characters and props inspired by Despicable Me using the iPhone app. The application also offers access to video clips, partners and pre-order links.

Holiday shoppers and kids can submit photos taken at Minion photo displays located in the Santa Photo areas at over 170 Simon Shopping Malls nationwide starting in November thru December 24.  Other Minion photo opportunities include the annual Macy’s Thanksgiving Day Parade on NBC in which the Minions and teen sensation Miranda Cosgrove, star of Nickelodeon’s hugely popular television series “iCarly” and the voice of Margo in Despicable Me, will be featured on afloat in the parade.  Thousands of colorful Minion beanie caps will be distributed in New York City the week of the parade to celebrate “Minion Madness” and provide additional photo opportunities.

For details on the promotion and prizes, please visit  www.minionmadness.com.

You may also like...
Related Topics:Blu-ray, Despicable Me, DVD, promotions