November is going to be a month-long fiesta of fan favorite, with new episodes of its hit animated series debuting throughout. Week one features episode premieres for Clarence (Tuesday, Nov. 1 at 5:30 p.m. ET/PT) and Mighty Magiswords (Thurs., Nov. 3 at 6:30 p.m.), which will get two full weeks of new Magisword-hunting adventures from Monday, Nov. 7.

And that’s not all, folks! A super-special half-hour episode of Steven Universe “Gem Harvest” is debuting Nov. 17 at 7:30 p.m. There’s back-to-back Adventure Time on Nov. 19 at 8:30 p.m. And of course more fresh episodes from Regular Show, Teen Titans Go!, The Amazing World of Gumball, Uncle Grandpa, We Bare Bears and The Powerpuff Girls.

CN has shared first-look clips from Clarence “Capture the Flag” and Mighty Magiswords “The Wrath of Neddy” — check them out below, as well as a full November premiere programming list. 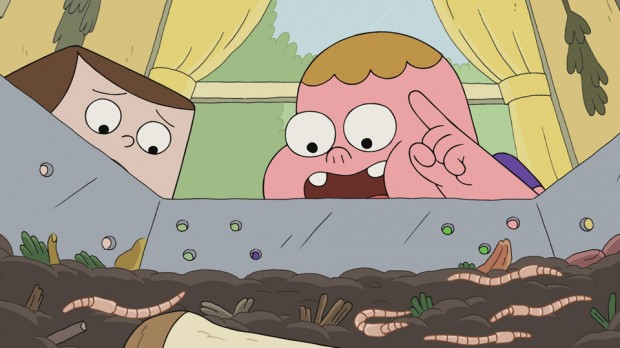 Tuesday, Nov. 1: “Worm Bin” – After his mom gets a worm bin, Jeff deals with the gross reality that he has a tub of bugs living in his kitchen, and Clarence obsesses over feeding the worms.

Wednesday, Nov. 2: “Clarence & Sumo’s Rexcellent Adventure” – On a school trip to the Aberdale Natural History Museum, Clarence and Sumo check out the displays, goof around with the exhibits and even remove a tooth from the T-Rex display.

Thursday, Nov. 3: “Birthday” – Jeff and Sumo expect no one to show at Clarence’s birthday party, just like last year. When dozens of kids arrive, the boys struggle to get face time with Clarence, the popular party host.

Friday, Nov. 4: “Tree of Life” – Clarence, Jeff and Sumo make it their mission to climb a really tall tree before it’s set to be chopped down. As they scale higher and higher their reality begins to slip away.

Monday, Nov. 14: “Capture the Flag” – Water balloon fights, warring factions and the risk of jail time, everything is on the line when Clarence and friends play the biggest game of capture the flag yet! Everyone wants to take home the crown, and the power to control the neighborhood’s juice boxes.

Tuesday, Nov. 15: “Cloris” – When Clarence befriends an aging woman at the local retirement home, he’s determined to remind her of her old self in order to convert the grumpy granny to his fun loving ways.

Wednesday, Nov. 16: “Fishing Trip” – Mel learns that Chad has never taken Clarence fishing, a tradition he sees as a rite of passage, and decides to remedy this with a bonding trip for all the boys! Split into two groups, Mel and Clarence learn a bit about each other while Chad struggles with the ins and outs of fishing.

Thursday, Nov. 17: “Belson’s Backpack” – After an accidental backpack swap, Clarence discovers that Belson is hiding an artistic side and attempts to foster Belson’s creativity.

Friday, Nov. 18: “Motel” – Following an insect mishap, Clarence’s house needs to be fumigated forcing Mary, Chad, and Clarence into a motel. In the meantime, Clarence and Chad learn a bit about responsibility while Mary contemplates a life of letting go.

Monday, Nov. 28: “Pizza Hero” – It’s the end of the school year, and as is tradition at Aberdale Elementary, Papa Marianio is slated to dish out his famous pizza along with a song and dance spectacle. As the kids wait in excitement, they share memories about times with Papa.

Tuesday, Nov. 29: “Sumo Goes West” – Clarence learns his best friend Sumo may transfer to another school! It’s up to Clarence to protest, petition and rally to convince everyone to let Sumo stay – or face losing his closest school pal!

Wednesday, Nov. 30: “Clarence for President” – It’s school election time at Aberdale Elementary, and Jeff is once again determined to become Class President. However, like previous years, he’s unsuccessful in connecting with other kids – that is until he sees a shoe-in puppet President – the lovable Clarence! 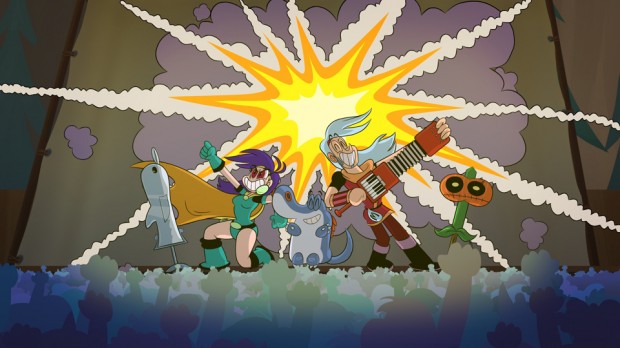 Thursday, Nov. 3: “The Wrath of Neddy” – After Neddy the Mallet easily sails through all the obstacles in the Cave of Stuff he decides to stay as King Neddy, displacing the Cave Weirdos who beg the Warriors to help them reclaim their cave.

Monday, Nov. 7: “Working for Scales” – Princess Zange is sick and requires a dinosaur scale for a tea remedy, but King Rexxtopher is fiercely against the Warriors stepping foot inside his Dinosaur Kingdom to get it.

Wednesday, Nov. 9: “Potion in the Ocean” – Witchy Simone joins the Warriors on a mission deep in the Fickle Sea to find an eye of newt for her magic potion, but Man Fish the Fish Man won’t let them harm his sea newt pal!

Thursday, Nov. 10: “Bad Bad Cop” – Vambre and Prohyas pretend to be cops in their attempts to shakedown a dangerous bunch of pirates to find a broccoli smuggler.

Friday, Nov. 11: “Gotta Get Grup to Get Down” – Grup hires the Warriors to help him become the biggest music star in Rhyboflaven, yet helping the little dragon achieve his big dream is no small task.

Monday, Nov. 14: “Thick as Thieves” – Phil the Pilferer robs Vambre and Prohyas of their very best Magiswords so he can snag the Sheepy Mantis, but the Warriors find out that no Magisword is lame as they manage to keep Phil from becoming Thief of the Year.

Tuesday, Nov. 15: “Biggest Fan” – An obsessed super fan goes to dangerous extremes just to be saved by her Warrior heroes: Vambre and Prohyas.

Wednesday, Nov. 16: “Dungeons and Dayjobs” – A botched mission leaves the Warriors in debt, so they take day jobs at Slugburger and sling Slugburgers for Witchy Simone!

Thursday, Nov. 17: “Little Sword of Horrors” – Prohyas grows a new Magisword from a tiny seed, but doesn’t know that his Carnivorous Plant Magisword is a menace to Lyvsherian society until it’s too late!

Friday, Nov. 18: “Champion of Breakfasts” – An epic battle between Vambre and her Waffle Magisword and Prohyas’ Pancake Magisword escalates to a war that can only end when Grup solicits his Cave Weirdo pals to be peacemakers. 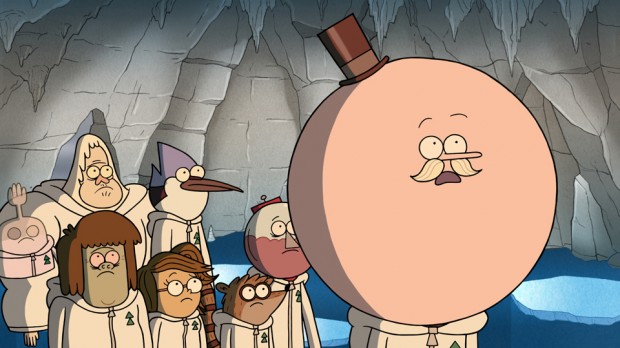 Thursday, Nov. 10: “The Key to The Universe” – The guys learn something super important. 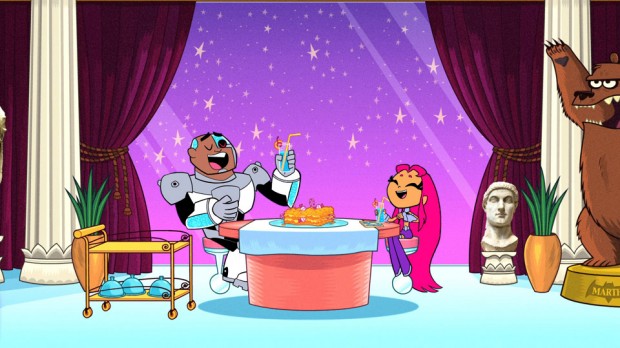 Thursday, Nov. 3: “Booby Trap House” – After being left alone at home, Cyborg and Starfire booby trap the tower for safety.

Thursday, Nov. 17: “Fish Water” – Starfire wins a goldfish at the carnival and vows to keep it alive.

Saturday, Nov. 26: “BBSFBDAY” – Beast Boy agrees to share his birthday with Starfire after learning she’s never had one on Earth. 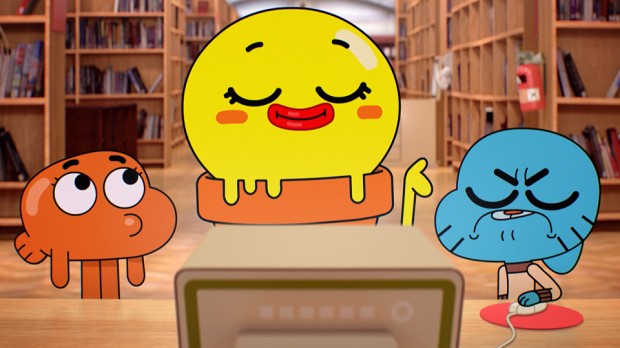 Thursday, Nov. 3: “The Test” – Gumball is livid when an online test keeps telling him that his character-type is “The Loser”. He’s convinced the only way to shake off this label is to do the opposite of everything he normally would. But Gumball suppressing his natural instincts leaves a vacuum, a Gumball-shaped hole that someone has to fill. That someone is Tobias, who starts turning the whole show into a cliched sitcom.

Thursday, Nov. 10: “The Slide” – A chance encounter with the woman of his dreams inspires Rocky to stop living life online and find love with the help of the latest dating app. Gumball and Darwin try to help Rocky through the tricky world of online romance. In the race to find Rocky’s dream girl, they discover people can forgive almost anything when you tell them you’re acting in the name of love.

Thursday, Nov. 17: “The Loophole” – Gumball and Darwin give Bobert specific instructions to ensure he acts in a safe and responsible manner. When Bobert starts applying his robot logic to their rules, they soon realize they’re going to have to be much clearer. Or he will end up destroying them all. 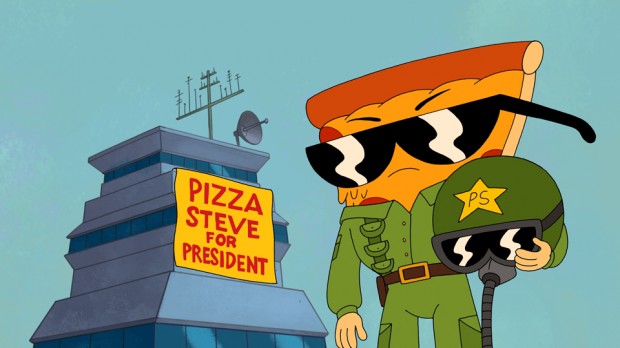 Thursday, Nov. 3: “Uncle Grandpa Runs for President” – Uncle Grandpa and Pizza Steve run against one another in the RV presidential race. 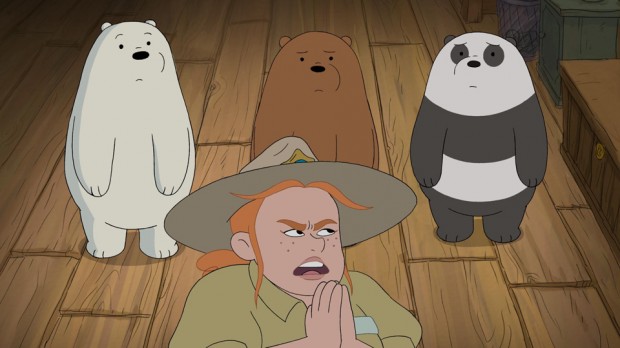 Thursday, Nov. 3: “Creature Mysteries” – Ranger Tabes tells the Bears she’s been investigating a mysterious creature. But when the Bears realize she’s actually investigating their friend Charlie, they split up to ensure Charlie’s safety.

Thursday, Nov. 10: “The Library” – The Bears find Chloe in the library exhausted from studying for an exam all day. The Bears stay to help Chloe study but make things worse in the process.

Thursday, Nov. 17: “Grizz Helps” – When his brothers don’t need his help for the day, Grizz leaves the cave to assist anyone he can throughout the city. 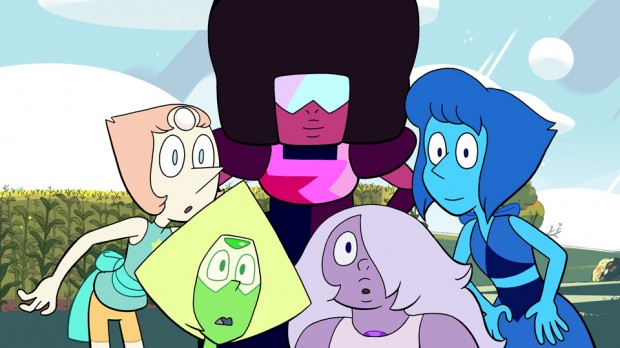 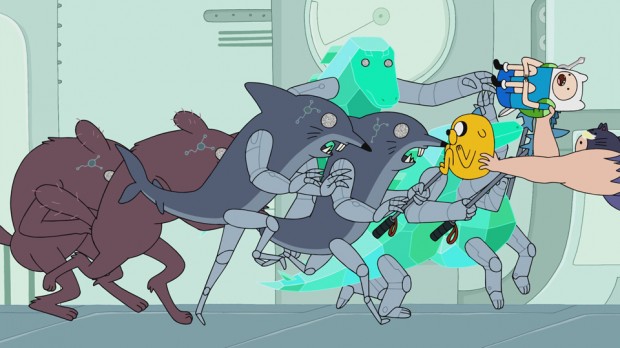 Saturday, Nov. 19 Back-to-Back Episodes “Preboot” – During an excavation of human artifacts, Finn, Jake and Susan are greeted by a mysterious new stranger who may hold the key to the past.

Saturday, Nov. 19: “Reboot” – Finn and Jake must take on one of the fiercest enemies they’ve ever faced when a powerful ally goes rogue. 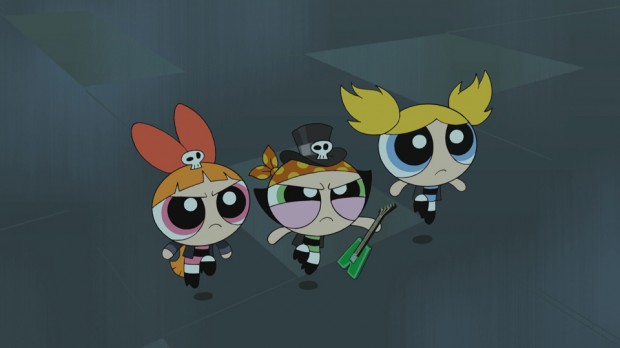 Monday, Nov. 28: “Electric Buttercup” – Buttercup gets more than she bargained for when she makes a deal with a cool ’80s metalhead to get a sweet new guitar.

Wednesday, Nov. 30: “Poorbucks” – When Morbucks loses her money, Blossom tries to reform her.