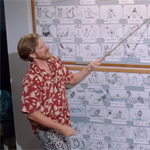 Disney’s double Oscar-winning animated musical The Lion King makes its Walt Disney Signature Collection debut on Digital HD today, which includes lots of fun, informative extras to give you even more insight into the 1994 classic. For instance, this great clip that takes you inside the story room with directors Rob Minkoff and Roger Allers as they perform an earlier iteration of the “Hakuna Matata” song. (And what a performance!)

The Lion King Signature Collection release will also arrive on Blu-ray Combo Pack ($24.98) and DVD on August 29. The Digital release includes the exclusive feature Musical Journey and BD bonuses, which include sing-along version, deleted & alternate scenes, bloopers & outtakes, The Recording Sessions, Visualizing A Villain, Inside the Story Room, and Nathan and Matthew: The Extended Lion King Conversation. Purchase or pre-order at http://movies.disney.com/the-lion-king.

Inside The Lion King Story Room