The wrestling personalities star along with Jon Heder, Diedrich Bader and Jeremy Shada in the family-friendly follow-up to the Oscar-nominated Surf’s Up. Wavemania is the directorial debut of Henry Yu (storyboard artist, Hotel Transylvania 2), based on a screenplay by Abdul Williams, and produced by Michelle L.M. Wong with Michael Luisi as EP.

In addition to the surf-pounding action, the DVD and Digital releases feature fun bonus material, including bloopers and featurettes “Behind the Mic: Hanging with the Dream Team,” “Chicken Joe’s Extreme Slaughter Island Tour,” How to Draw Your Favorite Characters with Henry Yu” and “Inside the Music with Composer Toby Chu.”

Cody Maverick, hungry for a new challenge, convinces an infamous big wave riding crew known as The Hang 5 (voiced by WWE Superstars John Cena, Undertaker, Triple H, Paige and Mr. McMahon) to let him join them on their journey to a mysterious surf spot known as The Trenches, where legend has it, they’ll find the biggest waves in the world. Cody soon discovers that the life he left behind might be more heroic than what any death-defying wave has to offer. 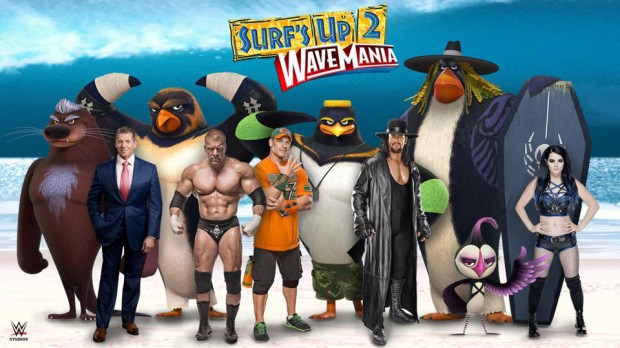