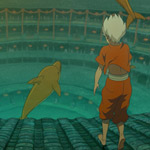 After 12 years in the making, a domestic box-office triumph in China and international buzz from critics and moviegoers, Big Fish & Begonia has landed on home video in North America through Shout! Factory. Available on DVD, two-disc Blu-ray combo pack, Digital HD and iTunes, it is a visually stunning animated tale of love, sacrifice and grand adventure which delicately blends modern storytelling influences with mythical legends and enchanting characters from beloved Chinese literary classics.

Synopsis: Under the ocean is a mystical race of beings that control the tide and the changing of the seasons. One of these beings, a restless young girl named Chun, wants to experience the human world, not simply observe it. When she turns sixteen, she is allowed to transform into a dolphin to explore the human world. However, the world is a dangerous place. Trapped in a vortex, she is nearly killed but saved at the last minute by a human boy, who drowns as a result. Consumed by guilt, Chun decides to go on an epic adventure to give the boy life again. As protector of his soul, Chun must defeat those who stand in her way, including her own family.

Orders are open through ShoutFactory.com and Amazon.