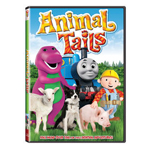 In a light week for new animated home video releases comes Batman Beyond to the rescue.

Batman Beyond: The Complete Series (Warner Bros., $99.98) collects all 52 episodes of the series, which ran three seasons from 1999-2001. Set in the future, it featured young Terry McGinnis taking on the mantle of Batman under the tutelage of an older Bruce Wayne.

The series previously was released on DVD in single-season sets in 2007, though this set includes three brand-new bonus features created specifically for this collection. They are:

The set also includes a collectible booklet and a copy of Secret Origin: The Story of DC Comics.

You may also like...
Related Topics:Animal Tails, Batman Beyond

Hair Apparent: The Scoop on Tangled
ABC Family to Air ‘The Gruffalo’ Dec. 9