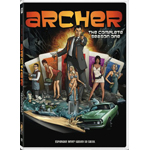 The week after Christmas is a great time to relax, catch up on some shopping and trade in those unwanted gifts for brand-new animation!

Released this week is Archer: The Complete Season One (Fox, $29.98), which collects all 10 episodes of the goofy spy series that aired last year on FX. The set arrives just in time for season two, which debuts Jan. 27.

If you’re more into the classics, get set for heartbreak with Peanuts: A Charlie Brown Valentine (Warner Bros., $14.97). The release features a bonus special, Someday You’ll Find Her, Charlie Brown.

And anime fans have Dragonball Movie 1: Curse of the Blood Rubies (FUNimation $14.98) and Tsubasa: The Complete Series (FUNimation, $74.98) to look forward to.