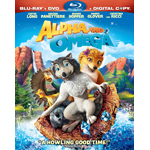 The call of the wild will lead animation fans to the home video department and the release this week of Alpha & Omega, an indie release.

Alpha & Omega (Lionsgate, $29.95 DVD, $39.99 Blu-ray/DVD/digital copy), was released in September and did decent business at the box office by grossing an estimated $39.4 million worldwide. Directed by Anthony Bell and Ben Gluck, and features the voices of Justin Long, Hayden Panettierre, Christina Ricci and Danny Glover.

You may also like...
Related Topics:Alpha and OMega, Ben 10: Ultimate Alien, Max & Ruby, Yo Gabba Gabba