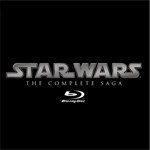 The Force is finally with Blu-ray.

Lucasfilm and 20th Century Fox Home Entertainment made lots of Star Wars fans happy Thursday by announcing plans to release all six films in the saga on high-def Blu-ray disc for the first time.

The films are now available for pre-order with a September release date. The complete saga has a suggested retail price of $139.99 and the trilogy sets are $69.99.