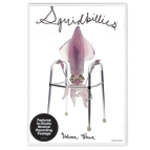 America’s favorite hillbilly squids are back.