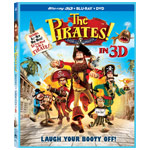 Aardman fans, rejoice! This spring’s stop-motion animated feature The Pirates! Band of Misfits arrives on DVD and Blu-ray 3D today (Tuesday, August 28). Directed by Aardman co-founder Peter Lord (Chicken Run) and co-directed by Jeff Newitt, this critically acclaimed action-packed comedy adventure follows the luxuriantly bearded Pirate Captain, voiced by Hugh Grant (About A Boy), in his first animated role, and his band of misfits (Martin Freeman, Brendan Gleeson, Al Roker, Anton Yelchin and Ashley Jensen) as they frolic on the high seas in an amusing quest to win the coveted “Pirates of the Year” award. Along the way they battle a diabolical queen (Imelda Staunton) and team up with a haplessly smitten young scientist (David Tennant), but never lose sight of what a pirate loves best: adventure!

The screenplay is by Gideon Defoe, based upon his books. Production Designer is Norman Garwood. Producers are Peter Lord, David Sproxton, and Julie Lockhart. Executive Producer is Carla Shelley. To date, the movie has made over $118.3 million worldwide.

The Blu-ray/DVD Combo Packs and DVD offers hours of extras, including Filmmakers’ Commentary, the exclusive “Mr. Bobo’s Flash Card Challenge” game, and the all-new “So You Want To Be A Pirate!” mini-movie. Exclusive to the Blu-ray is the “Pirate Disguise Dress-Up” game, in which fans can help our swashbuckling pals get past Queen Victoria by disguising them in various silly get-ups. The Blu-ray also exclusively includes two behind-the-scenes featurettes: “From Stop to Motion,” taking fans on a journey through the making of the film, and “Creating the Bath Chase Sequence,” a look at the various stages involved with shooting the bath tub scene. Additionally, two short films with optional commentary from Director Peter Lord are exclusive to the Blu-ray. Viewers can experience The Pirates in 3D with the 3-disc 3D Blu-ray/DVD Combo Pack.

You can win a free copy of this special animated feature by entering our contest today – Here’s how:

We have three copies of the awesome Sony/Aardman The Pirates! Band of Misfits to give away this month (Courtesy of Sony Home Entertainment). All you have to do is answer the following question correctly and email your name and address to webmaster@animationmagazine.net, with the subject line The Pirates Giveaway. 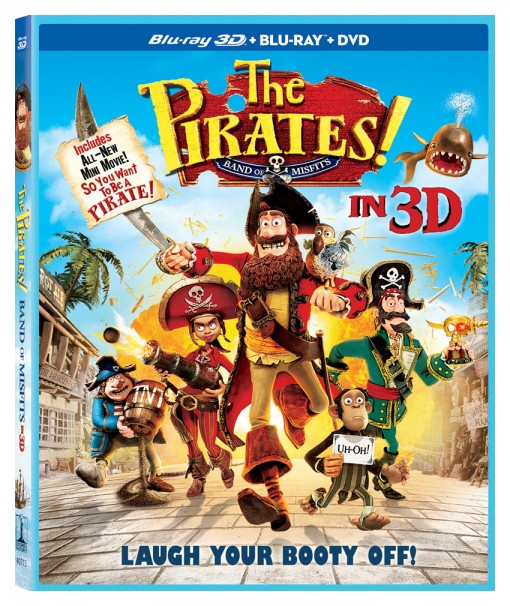