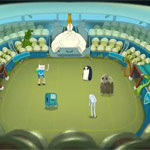 Developed by Texas- and India-based YesGnome (Star Trek Trexels), Champions & Challengers is set in a Land of Ooo where the evil Dice Lord has kidnapped beloved Adventure Time characters — and it’s up to you to help them. Players must fight strategic battles against Dice Lord to recapture the show’s colorful heroes and baddies, then rank them up to unlock cool new abilities. Players can discover and upgrade character synergies to build a perfect team to take on the Dice Lord’s deadly challenges.

Gamers can collect more than 90 Champions — including Finn, Jake, Princess Bubblegum, BMO, Fionna, Cake and even villains like Ice King. Assembled into teams, these popular characters can be used in epic real-time battles utilizing turn-based RPG combat as players perfect their strategy and bust out special Tricks and Artifacts for bonus damage. Plus, players can challenge other real live humans and rise up the leaderboard in the PvP Arena, and participate in live events.