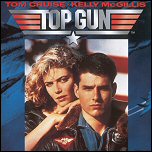 As Tom Cruise battles aliens on the big screen in War of the Worlds, his fighter pilot alter-ego is feeling the need for speed again, this time on the double screen. Video game publisher Mastiff announced plans to publish a Nintendo DS title based on Paramount Pictures’ 1986 blockbuster, Top Gun.

“Top Gun‘s intense action translates perfectly into a video game,” says Bill Swartz, who’s credited as ‘head woof’ at Mastiff. ‘[The game] exploits the capabilities of the Nintendo DS to duplicate that experience in a handheld environment.” One thing the game will take full advantage of is the DS’s ability to deliver virtual surround-sound.

Top Gun for Nintendo DS will take gamers back to the Navy’s prestigious Fighter Weapons School, where they enter as rookie pilots and vie to become the best fighter pilot in the world. The title puts the player in the cockpit of a heavily armed jetfighter plane to navigate 10 single-player missions such as high altitude dogfights, escort missions and airspace protection maneuvers over diverse terrain and through dramatic weather. Also featured is head-to-head play for two, three or four players.

Gamers to be Left Behind
Indie Games Con ’05 Registration Opens