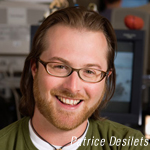 Video game giant THQ has opened a new studio in Montreal and announced that top developer Patrice Desilets will join the company next summer to run it.

“The best way we can deliver fresh, high-quality gaming experiences is by working with the best talent,” said Danny Bilson, THQ executive VP, core games. “We expect calendar 2011 to be a watershed year for THQ, and adding developers like Patrice helps ensure our focus on new IP and great games charted by leading industry artists.”

Desilets previously served as creative director on the Assassin’s Creed franchise, as well as Prince of Persia: The Sands of Time. THQ has the exclusive option to have Desilets work from THQ’s new Montreal studio beginning summer 2011.

When he joins the studio, Desilets will be charged with the hiring of a new team that will develop new intellectual properties for THQ.