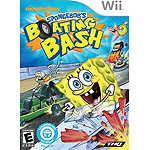 SpongeBob SquarePants is well established as a TV icon, and thanks to a new deal between THQ and Nickelodeon he also looks to be a gaming icon for years to come.

The two companies announced they have entered into a multi-year licensing agreement that gives THQ the worldwide rights to develop and publish games based on the popular SpongeBob franchise. The deal covers games for the PlayStation 3, Xbox 360 and Wii consoles, as well as for the PlayStation Network and Wii Virtual Console.

The first game due under the new deal will be designed to use new gaming technologies in the Nintendo 3DS, THQ’s uDraw GameTablet for Wii and the Kinect motion controller for Xbox 360.

“Over the last eight years, THQ has been creating quality gaming experiences based on everyone’s favorite animated character who lives in a pineapple under the sea,” said Martin Good, THQ executive VP of kids, family, casual and global online services. “We are pleased to continue our long-standing relationship with Nickelodeon and excited to deliver more SpongeBob SquarePants video game offerings for the multitude of fans worldwide.”

THQ has been developing video games based on SpongeBob SquarePants since 2002, and has shipped more than 29 million units.