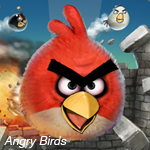 If you can’t get enough of Rovio’s addictive mobile game Angry Birds, don’t worry — an animated version is on its way to help fill the void.

According to the New York Post, Finland-based Rovio will produce an animated show based on the popular app  for either TV or the web.

Angry Birds has been a huge hit since its release in December 2009, recording more than 50 million downloads since then.

Rovio CEO Mikael Hed told the U.K. site C21Media.net that the next phase for the project is to move into production. He did not reveal which companies Rovio has had discussions with on producing or distributing the project.