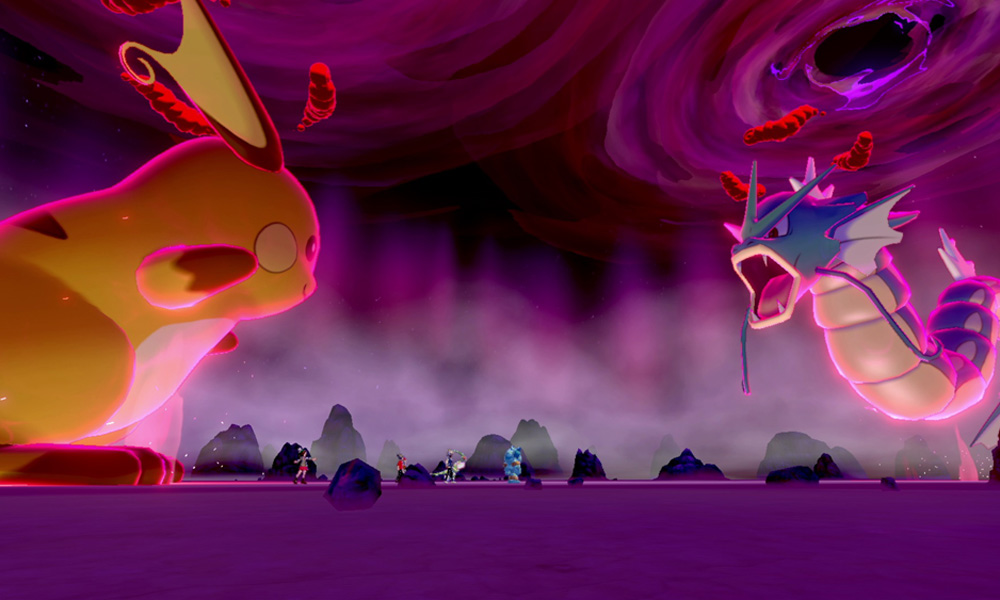 New game features and the launch date for Pokémon Sword and Pokémon Shield — the newest additions to the main series of the smash hit video game franchise — were announced Wednesday during a Pokémon Direct online presentation. Developers at GAME FREAK inc. also provided a closer look at newly discovered Pokémon from the Galar region, the setting of the highly anticipated games. Sword and Shield games will launch November 15, exclusively on the Nintendo Switch system.

Dynamax is a phenomenon unique to specific locations in the Galar region, where Pokémon can take on gigantic appearances during battle, and an integral part of battles in the region. Pokémon from the Galar region are able to Dynamax, and when they do, they become tremendously strong and receive a boost to their power. Trainers can only Dynamax their Pokémon once during battle, and the Dynamaxed Pokémon will return to its regular form after three turns. Only Trainers who possess a Dynamax Band can Dynamax their Pokémon.

All the moves of a Dynamax Pokémon will turn into special Max Moves. Max Moves are powerful, and some can even trigger additional effects. For example, the Normal-type Max Move, Max Strike, has the additional effect of lowering the Speed stat of an opponent it hits. The Max Moves the player’s Pokémon can use are determined by the kind and types of moves they knew before Dynamaxing.

As in previous games, Pokémon Gyms are found in stadiums throughout the Galar region and attract Trainers that are experts in specific types of Pokémon. To become Champion, players will need to defeat the top Trainer, or Gym Leader, in each Pokémon Gym. Spectators flock to the Gym Stadium to view these battles, which often involve intense clashes between Dynamax Pokémon. The matches are also broadcast on television throughout the Galar region. Milo is the Grass Gym Leader and is well liked by the Trainers of his Gym. His credo is to always enjoy battles and he specializes in endurance matches using Grass-type Pokémon.

The Wild Area is a vast expanse of land in the Galar region with untamed wilderness. It is full of nature and connects several different towns and cities. Trainers will find a greater variety of Pokémon living in the Wild Area than anywhere else in the Galar region. The Pokémon encountered in the Wild Area will change depending on factors like weather or location, so Trainers might see something new each time they visit. While in the Wild Area, players can control the camera to explore the vast areas around them and search for Pokémon and items.

As players travel through the Galar region, they will find many unique locations, such as cities where Pokémon and people work and live together (similar to Ryme City in the Detective Pikachu movie). Pokémon play an important role in the Galar region where many companies are eager to include Pokémon as part of their workforce. In Galarian culture, Pokémon battles are regarded as the most popular form of entertainment. Pokémon battles are held in stadiums, where challengers and Gym Leaders face off to the passionate cheers of fans and spectators. The Pokémon League is where Trainers gather to compete in Pokémon battles and hone their skills. Players will have to battle the Pokémon Gyms found around the region as they try to reach the pinnacle of the Pokémon League and earn the title of Champion.

Some of the new characters players will mee are:

The new Legendary Pokémon Zacian and Zamazenta are shrouded in mystery and are unknown even to those who live in the Galar region. Zacian’s attacks are so graceful that its movements captivate opponents. Holding what appears to be a sword in its mouth, Zacian’s shining blade can cut through anything. With majestic movements and what appears to be a shield covering its body, Zamazenta can turn back any attack and overwhelm any opponents that dare face it.

Grookey, Scorbunny, and Sobble are the three Pokémon that players can choose as their first partner.

Among the many different species of Pokémon native to the Galar region are:

Battles with wild Pokémon in tall grass or caves will occur when players run into Pokémon that they can see wandering around. Some Pokémon will pursue the player once they see them, while others will run away. The “!” mark that will appear above tall grass also seems to be an indicator of wild Pokémon hiding there!

Each Pokémon has an Ability, which can have certain effects during battle, while out exploring, or both. In Pokémon Sword and Pokémon Shield, Gossifleur and Eldegoss can possess the new Cotton Down Ability. When a Pokémon with this Ability is hit by an attack, it will send out cotton fluff that will lower the Speed stat of other Pokémon.

Any Pokémon that Trainers find or catch during their adventures in Sword and Shield will have its information registered in the Pokédex. The Pokédex in these titles will actually be part of the player’s Rotom Phone. The Rotom Phone is also home to Rotom, a Pokémon that can enter various electrical appliances. A player’s Rotom Phone can do a lot more than serve as a Pokédex. For example, it can be attached to a bike to make it move faster on land or even travel over water once the bike is modified.