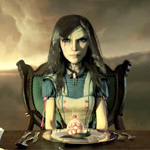 Is the world ready for more insane version of Lewis Carroll’s heroine Alice? Electronic Arts and Spicy Horse are betting good money that their upcoming title Alice: Madness Returns is going to put a big smile on gaming and action-adventure fans when it hits the stores in June 14.

This much-anticipated follow-up to American McGee’s take on the classic tale is much darker than the Disney version as Alice goes on a journey through a macabre Wonderland to discover the truth behind her haunted past and psyche. Alice: Madness Returns takes place 10 years after the conclusion of the original game with Alice struggling to recover from the emotional trauma of losing her entire family in a fatal fire. After spending a decade institutionalized in an insane asylum, she is finally released to the care of a psychiatrist who just may be able to help her conquer the nightmarish hallucinations that still haunt her. Alice embarks on a mission to root out the true cause of her family’s mysterious death, jumping from a gloomy and stark London to a rich and provocative Wonderland.

Fans can pre-order the title at any retail outlet nationwide; those that pre-order at GameStop, Amazon.com, or EA Store.com will receive an extra digital surprise. Pre-ordering the Xbox 360, PlayStation3 or PC version at these retailers will grant players a bonus digital download* of the game’s original soundtrack with nine full songs plus an all-new track by Chris Vrenna, formerly of Nine Inch Nails.

Additionally, EA is releasing Alice: Madness Returns – The Complete Collection – a PC bundle that features a re-mastered version of the original American McGee’s Alice. This PC version is exclusively available at EA Store.com and brings together both the original cult-classic prequel and the new chapter in the Alice fiction together into a single package.  Both are rendered in high-def and packed with outrageous characters and unforgettable adventures. Alice: Madness Returns – The Complete Collection is available for $49.99 in North America.

Here is a teaser for the game: