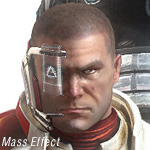 Japanese film production company T.O Entertainment has signed on as co-producer of the film, which will be released on home video in 2012.

“Over the last few years, we have revealed different pieces of the Mass Effect world through different media,” says Hudson. “Extending the story through an anime medium is another amazing opportunity for us. Partnering with FUNimation ensures that we will bring this rich universe to life with the utmost quality and the same attention to detail that the Mass Effect games are known for.”

“It is thanks to the enormous and passionate Mass Effect fan base that this movie is made possible,” said Fukunaga. “With production underway on the Dragon Age video, we are excited to team up with another BioWare team to add an exciting new chapter to this vast sci-fi world.”

The original Mass Effect game and its sequel Mass Effect 2 have received over 250 awards and 100 perfect “10” scores from critics worldwide. BioWare will release more information about Mass Effect 3 soon.