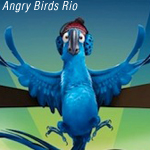 Angry Birds Rio is now available worldwide to help animation fans while away the hours until the April 15 opening of Fox and Blue Sky Studios’ Rio.

The movie-themed version of Rovio’s incredibly popular mobile game can be downloaded from the App Store for iPhone, iPod Touch and iPad, from the Mac App Store for Mac computers, and for Android devices in the Amazon Appstore. The game was developed in conjunction with Twentieth Century Fox, and features the animated stars of the upcoming film.

The game sees the Angry Birds find themselves in the magical city of Rio where they must save their friends, the rare macaws Blu and Jewel.

Users of Angry Birds Rio will have the ability to directly buy tickets to see the film with a new in-app ticketing feature via http://www.RIO-themovie.com.