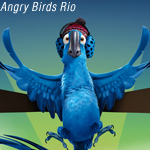 20th Century Fox gave a big push to its upcoming animated film Rio, showing off Friday the first clips to the press and announcing a collaboration with the makers of the hit mobile game Angry Birds.

The studio and Finland-based game-maker Rovio announced Angry Birds Rio, a new version of the game that features characters from the film. The plotline has the original Angry Birds kidnapped and taken to Rio de Janerio, where they escape and set out to save their friends — and stars of the movie — Blu and Jewel. Angry Birds Rio will debut in March to coincide with the gala world premiere event for the film. The game will debut with 45 dedicated levels and will regularly add new levels via updates. A sneak preview of the film can be seen online at: http://rio.angrybirds.com.

“Angry Birds Rio is a match made in heaven for a mobile application and a major motion picture, and this collaboration with Fox is definitely one the most exciting partnerships we have entered into with the Angry Birds brand to date,” said Mikael Hed, CEO of Rovio Mobile. “In addition to expanding the horizons of two fantastic entertainment brands and creating a great new gaming experience, we have also taken the concept of combining a mobile application and motion picture promotion to an entirely new level.”

The announcement came at a press event on the Fox lot in which director Carlos Saldanha introduced the first clips of Rio. The film is the most-recent from Ice Age creators Blue Sky Studios, and features the voices of Jesse Eisenberg, Anne Hathaway, Leslie Mann, Jamie Foxx, George Lopez, Tracey Morgan, Will.i.am and music from Brazilian legend Sergio Mendes.

Here’s a look at the trailer for the film, which will be released in stereoscopic 3D on April 15:

What do you think? Does Rio look worth the trip?

‘Evangelion 2.0: You Can (Not) Advance’ Gets Ready for its Flight to U.S. theaters
Brit Henry Cavill Set as Snyder’s Superman