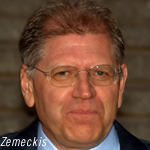 Robert Zemeckis has re-emerged at Sony Pictures Animation, which has optioned the book How to Survive a Garden Gnome Attack for him to produce as a mix of CG animation and live-action, Variety reports.

The film is being developed as an R-rated feature with a budget in the $20 million to $30 million range. A screenwriter has not been attached, but Zemeckis will produce with Jack Rapke, formerly of ImageMovers; Ellen Goldsmith-Vein and Eric Robinson of the Gotham Group; and Jackie Levine, the trade reports.

Zemeckis suffered a setback with the flop of Mars Needs Moms, as Disney canceled its support of his planned animated remake of the Beatles’ Yellow Submarine. He has not committed to directing the film.

The Chuck Sambuchino book the movie is based is a fake survival guide for surviving the inevitable attack of the garden gnomes.