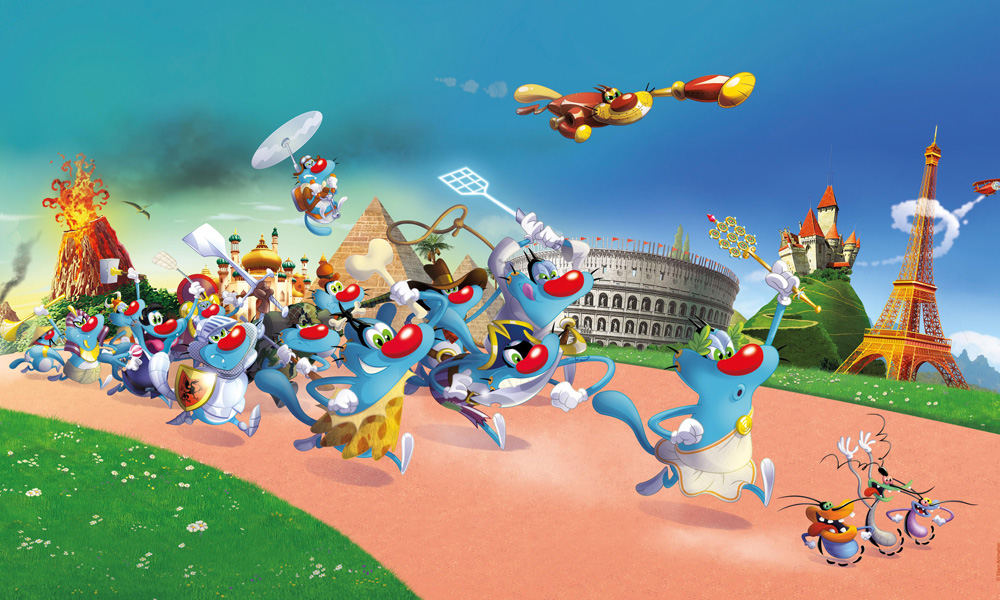 The Board of Directors of Xilam Animation S.A. convened September 25 to approve the interim financial statements as of June 30, 2018. The meeting was chaired by founder Marc du Pontavice.

Xilam achieved revenue growth of 50%, of which 85% growth came from new productions, having delivered 37 half-hour programs, thus confirming an excellent outlook for deliveries over the current year.

After catalogue revenue growth of 77% in 2017, Xilam recorded further double-digit growth in this revenue stream of +16%, reaching a new record of €5.4 million.

Sales to television channels, notably of Oggy and the Cockroaches and The Daltons series, which are in high demand in both Europe and Asia, made a significant contribution to growth in H1 revenue.

After restatement for the impact of the bonus share award plans in the amount of €1.1 million and the cost of relocation of the head office in the amount of €0.5 million, Group operating income came out at €5.4 million compared with €3.2 million in the first half of 2017, representing growth of 67%.The restated operating margin stands at 39% versus 35% in the first half of 2017.

Xilam’s profitability confirms the robustness of its business model:

Shareholders’ equity, incorporating the €22.3 million capital increase of June 29, 2018, rose by 98% to €45.6 million. Following that capital increase, Xilam has a surplus cash position of €17.8 million after deduction of its debt.

The studio enjoys renewed confidence and very good visibility for the coming months, ahead of its expected ramped-up activity across its five growth drivers:

New productions – having successfully concluded the delivery of four series over the period, Xilam is currently producing four series with scheduled deliveries over the coming including Mr. Magoo, the third season of Zig & Sharko, Coach Me If You Can and The Fabulous Adventures of Prince Moka.

Xilam confirmed its target to deliver 70 half-hour programs over full-year 2018 and is confident in its capacity to generate a record level of operating income. In parallel, Xilam is working on the development of several series which it plans to bring into production in the coming months, further confirming its target to deliver 100 half-hour programs a year starting in 2020.

Its ongoing productions and developments will also add successful programme series to its catalogue. This amounts to a net book value in the balance sheet of €22.7 million, a very low value in relation to the annual net revenue from the catalogue (€8.4 million in full-year 2017).

International activity represents a major growth driver. After India, where Oggy and the Cockroaches has been remarkably successful over the last number of years, Xilam is gaining traction in new territories, notably China where 11 series from the catalogue have already been sold.

The Group is pursuing the development of its digital activities, drawing on the excellent exposure obtained through the Xilam brands, notably in the United States. In this regard, Xilam’s catalogue is expected to surpass four billion video views on YouTube in 2018.

Finally, by diversifying its portfolio with Paprika and Tiny Bad Wolf, Xilam is focusing on investing in the preschool segment, a major driver of future growth in merchandising revenue.

Thanks to the privately placed euro bond and its capital increase, Xilam currently has fire power of more than €35 million for targeted and accretive acquisitions. It is already in talks with several animation studios in Europe and the Group hopes to finalise the first of these in the coming months.

Chairman and CEO du Pontavice commented, “This record earnings publication underscores the relevance and strength of Xilam’s business model. Since the European production market is particularly dispersed, nuggets of creativity and technological know-how are to be found. Xilam’s editorial and commercial expertise may be the key advantage that transforms the value of these studios.”

Want to learn more about the animation industry in France? Pick up the November issue of Animation Magazine (#284)!

You may also like...
Related Topics:Coach Me If You Can, featured, Marc du Pontavice, Mr. Magoo, Oggy and the Cockroaches, Paprika, The Daltons, The Fabulous Adventures of Prince Moka, Tiny Bad Wolf, Xilam Animation, YouTube, Zig & Sharko
Geographic Region:Europe