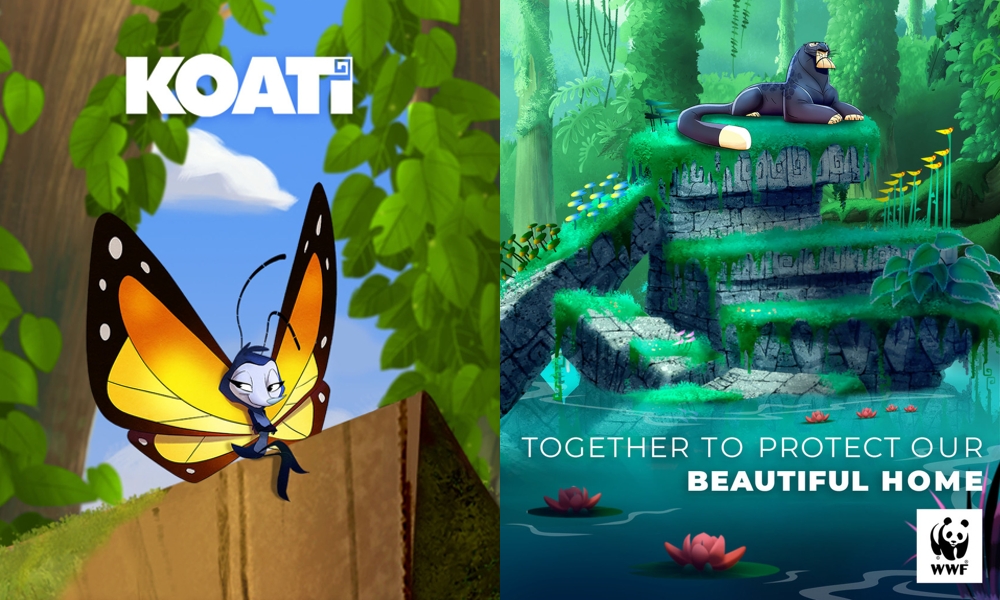 The global conservation organization WWF has joined forces with the team and cast of the much-anticipated animated comedy film Koati, to bring to light one of the most biodiverse regions in the world: Latin America. The partnership, announced on Earth Day, arises at a crucial moment to encourage the world to deepen its relationship with nature and prioritize and safeguard our beautiful planet and the people and animals that live on it.

“Koati is a beautiful, animated film that makes you laugh and will also touch your heart. It was born from a sense of Latino pride of our family values, authenticity, and respect for our environment and endangered animals,” said executive producer Sofía Vergara. “Koati is a fun and beautiful gift from Latin America to the world.”

Human and planetary health are interconnected, and this partnership is a great opportunity to raise awareness and inspire action in young people and families to connect with environmental issues and do their part to save our collective home: Planet Earth.

Billed as the first Latin animated comedy starring a family of exotic creatures, who embark on an adventure to save their rainforests. Alongside exec producers Vergara and Anthony, the film’s creative team features renowned Hispanic producers, musicians, actors, comedians and influencers that teamed up, for the first time outside of Hollywood. Over 25 international celebrities – with a combined social media reach of over 300 million fans – are participating in the movie to support WWF’s mission of protecting and restoring nature, by uniting their voices on the family animated comedy.

As conservation partner, WWF will support the Koati team with the development of various educational products to help raise awareness about the relevance of nature.

“Latin America holds unmatched biodiversity, stunning landscapes and seascapes, and cultures and communities with deep connections to nature,” said Carter Roberts, President and CEO of WWF – U.S. “On this Earth Day, WWF thanks the artists, celebrities, and influencers behind Koati for helping us send an important message. If we work together, we can repair our broken relationship with nature and secure a future for people and animals in Latin America and around the world. The time to act is now.”

WWF efforts are focused on protecting emblematic and endangered species and their habitats, such as the ones featured in the film. The Americas are home to the jaguar – the continent’s largest cat – that has lost 50% of its original range. WWF work aims to ensure the recovery of jaguars and their habitats, while contributing to sustainable development in local communities.

WWF also works to protect the Eastern migratory monarch butterfly. In Mexico, WWF collaborates to promote good forest management practices in the areas where millions of butterflies congregate each year to spend the winter. In the U.S., WWF works with leading food companies to help rebuild natural habitats for monarch butterflies and other pollinators.

“Latin America is among the regions with the most biological and cultural diversity in the world, but it is also losing species and ecosystems at a faster rate than anywhere else. We must act quickly to double-down on our efforts to conserve our amazing nature that provides water, food, air, medicine, shelter, livelihoods and also the colors, flavors and rhythms that make up our identities,” said Roberto Troya, Regional Director of WWF in Latin America and the Caribbean.

Trailer: ‘Robot Chicken’ Goes to Riverdale in ‘Archie Comics’ Special
‘The Mitchells vs. the Machines’ Connects with Critics