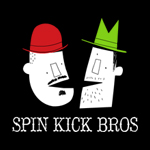 After a year on the festival circuit, Tom Gran and Martin Woolley’s (a.k.a. Spinkick Bros) animated short Writer’s Block has launched online. Set in a prison for “criminally poor writers,” it follows a gang of cons who get ahold of the script to their own lives and attempt to re-write it in order to make their escape. You can watch the short below:

“We usually build our projects from a genre or setting that we like and we felt like prison movies were an area we liked a lot but hadn’t really explored yet,” says co-director Gran. “We thought something about a character trying to escape from the film itself in some way would give us a chance to play around with the narrative structure of the film, but still have a fun, straight-forward story.”

After building “photomontage mugshots” to develop the character designs, the short was animated in Flash with the help of WÖNKY Films (who also collaborated with Spinkick Bros on their Cartoon Hangover pilot Ace Discovery) and comped in After Effects. Background artist Adam Davis used Photoshop and Artrage to create the environments.

“The bulk of animation took place over about a month, during which I was working with another animator, Todd Setter, but after that I spend a few months doing clean up, color, adding in all the tattoos and regretting my life choices,” adds Gran.

WONKY Films has had a busy last 18 months, having released the short Why Did the Chicken Cross the Road? online in January while also bringing more films to the festival circuit, including The Nether Regions featuring the voice of Brian Blessed. 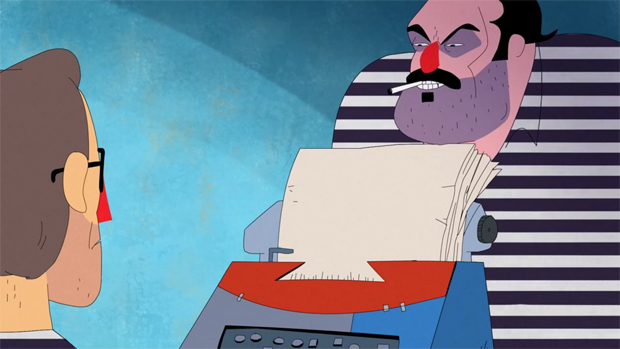