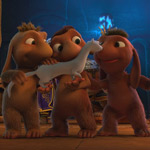 Leading Russian animation co. Wizart has been shopping its new CG sequels at the Marche du Film in Cannes over the past week and change. And the new installments The Snow Queen: Mirrorlands and Sheep & Wolves: Pig Deal, currently in production, look to continue the success of these franchises with distribution partners around the world.

In addition to being bolstered by previous hit films, both pictures are benefitting from the experience of US animation veteran Robert Lence, who has worked on classic features including Beauty and the Beast, Bambi, Monsters, Inc., Shrek, Toy Story, The Lion King and Up. Lence participated in the development of both films and serves as co-director on Mirrorlands and one of the writers on Pig Deal.

Attendees of the Marche du Film were the first to see an excerpt from The Snow Queen: Mirrorlands. The film has been picked up by ACME Film (Latvia, Lithuania & Estonia), Kino Swiat (Poland – where Snow Queen 3 earned $816K in 2016) and Blitz d.o.o (ex-Yugoslavia). After its successful release of SQ3 in February (b.o. $483K), CinemArt has picked up the fourth installment for Czech Rep. and Slovakia. The franchise will also return to Bulgaria via PRO Films, where SQ3 was the most successful independent theatrical animation release ever.

Appropriate to its wintery theme, Mirrorlands is set to premiere in theaters at Catholic Christmas Eve 2018.

“In our new movie The Snow Queen: Mirrorlands, we’ve decided to expand the universe and added a new high-technological town, full of scientific progress, trolls and magic caves. The fourth movie will show a collision between high technologies and magicians. We’re sure our viewers are going to really enjoy watching it,” commented Vladimir Nikolaev, Executive Producer of Wizart.

The Snow Queen 3: Fire and Ice recently debuted in China with huge success, hitting $2.74 million at opening (a record for Russian animation) with a current total of about $11M (68.77M yuan). Leading national distributor Turbo Films and China Film Group made the unprecedented decision to extend the movie’s release from April 5 to June 1 — the average theatrical run in China is about a month.

“The Snow Queen 3 has been warmly embraced by children and parents alike, filling a gap in the market for princess-genre animated films. We couldn’t be more thrilled to have the film stay in theatres for one more month,” said a representative of Turbo Films.

The third movie also scored an impressive result in France, taking over $2M at the box office and marking a first for Russian animation in the country, according to Wizart General Producer Yuri Moskvin.

Wizart also debuted an excerpt of Sheep & Wolves: Pig Deal for Marche audiences this year. The sequel will bring Grey and pals to Norway for the first time through Storytelling Media; the first film entered distribution in August 2017 and was one of the first Russian animation releases in Scandinavia. Also snagging the sequel are MCF MegaCom (ex-Yugoslavia), PRO Films (Bulgaria) and ACME Film (Latvia, Lithuania & Estonia).