Fox is hoping that audiences will be hungry for its prequel to the 1968 cult classic as Rise of the Planet of the Apes hits the screens this Friday (August 5). Showcasing the talents of James Franco, Freida Pinto, John Lithgow, Tom Felton and performance capture master Andy Serkis as Caesar, the movie is directed by Rupert Wyatt and features stunning effects and performance capture work by by New Zealand’s Weta Digital.

The original series of five Apes movies wrapped in 1973 but in 2001, the franchise made a lame comeback with the a Tim Burton-directed version of Planet of the Apes.” That movie was critically panned but grossed $362.2 million worldwide. The new pic, which has been getting positive early buzz and ranked 83% fresh on Rotten Tomatoes, will also open overseas in 26 markets this weekend. 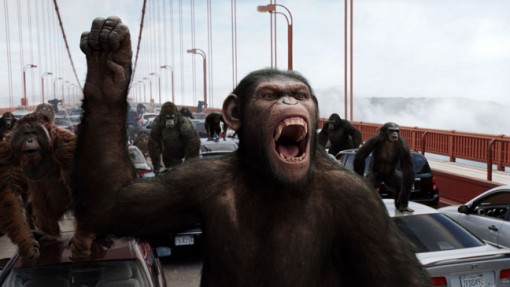 The other new movie this week is Universal’s best-buds-body-swapping comedy The Change-Up, starring Jason Bateman and Ryan Reynolds. Experts predict that Cowboys & Aliens, The Smurfs, Captain America, Harry Potter and the Deathly Hollows Part 2 and Transformers: Dark of the Moon will continue their fireworks during this very hot weekend.