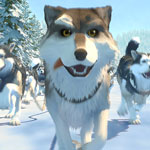 Few would argue that animation is the best approach to use for telling a story through the point-of-view of an animal. Which is why the fact that it took more than a decade for European producers to secure financing an animated adaptation of the classic Jack London novel White Fang, about the struggle toward domestication by a mixed-breed wolfdog, seems shocking. But it was only after adding an Oscar pedigree to the mix that the Luxembourg-based company Bidibul and France’s Superprod were able to finally secure $12 million in production money.

That pedigree was supplied by director Alexandre Espigares, whose 2013 film Mr. Hublot, created with Laurent Witz, nabbed the Academy Award for Best Animated Short. “My producer in Luxembourg called me one day and said, ‘We have this script with a French co-producer, and we’re trying to put this movie together, so would you mind reading it?” says Espigares, whose previous animation credits include the series Star Wars: The Clone Wars  and the feature Happy Feet 2. He not only read it, he connected with it. “There were a lot of things in the script that immediately spoke to me,” he says. “I had a feeling that I was looking at an animated film that was quite different from what was being made for a family audience.”

For one thing, the script contained far less dialogue than usual for a modern animated feature, reflecting the fact that the story was told from the animal’s perspective. “I’m a ‘show, don’t-tell’ type of guy,” Espigares says, “and I don’t like it when an animated film tries to explain everything, taking the audience by the hand.”

Working with art director Stéphane Gallard, Espigares developed a look for the film that was realistic without being too realistic. “The idea was to basically move away from what we see in animation today, in which everything is very photorealistic,” he says. “Even when characters have cartoonish proportions, their textures and clothing look very realistic. So, we decided to go for a look that’s more painterly.”

To achieve that, Mari 3D texturing software was employed, and the artists were instructed to keep the brushstrokes as rough as possible. “We told them not to go beyond a certain five brushes, so when the camera would go close to a character, you could see the lines of the brushstroke,” Espigares says.

Paris-based animation and vfx studio Circus served as “the mothership” for the production, coordinating the work of eight other studios situated across Europe, a concession to the continental system of financing. “You have to have multiple studios because every region and country you get money from insists on having that money spent in that region or country,” Espigares notes.

Motion capture was utilized for the human characters, whose designs, while stylized, are decidedly un-cartoony. Espigares says mo-cap was also tried out for the film’s canine cast before it was determined that keyframe animation, accomplished with Maya, was the best approach for the dogs. While some scenes required heightened expressions among the animal characters to make them relatable to audiences, he and his animation team strove to keep the dogs as realistic as possible. To that end, actual wolves were observed.

“The idea was to basically move away from what we see in animation today, in which everything is very photorealistic. Even when characters have cartoonish proportions, their textures and clothing look very realistic.”

“We went to a park that had wolves in order to study their behavior and have a wolf specialist show how wolves react to certain things,” he says. “An animal’s behavior shows a lot in their body posture, the way they put their ears back, or upright, or the way their tail is tucked between their legs, or moving.” Because he also wanted to stay close to the gritty tone of the Jack London novel, White Fang includes some violent dogfight sequences, made even more intense by dramatic lighting.

“A lot of scenes happen during ‘magic hour,’ sunrise or sunset, and we have this really dramatic, reddish lighting,” the director says. “I wanted to keep everything as naturalistic as possible whenever we were with the dogs, but whenever we shift to the human world, the lighting would get a bit more dramatic, even to the point where we went a little overboard during the dogfights to show the cruelty of the humans.”

The attention paid off, and it is the canine animation of which Espigares is most proud. “We were so worried about the dogs that we ended up having dogs that look a lot better than our humans,” he confesses. “But since [the canines] are the main focus of the movie, I’m fine with that. The humans are extras in this movie, and the dogs and wolves are running the show, and I’m really happy with them.”

“Extras” may be an exaggeration, though. Even with the aforementioned limited dialogue — to which three writers, Philippe Lioret, Dominique Monfery, and Serge Frydman, contributed — White Fang was able to draw a formidable American cast to fill its main human roles: Rashida Jones, Paul Giamatti and Nick Offerman. And despite its European origins, White Fang (or Croc-Blanc, in its original form), was animated to English lip-sync. “We wanted to make sure we’d be able to sell it internationally,” he says.

Made for Big Screens

With New York-based Big Beach Films on board as co-producer, the film was picked up for American distribution by Netflix, after it was screened at the Cannes Film Festival. However, plans for an awards-qualifying theatrical run might be torpedoed by Steven Spielberg’s recent campaign to exclude Netflix movies from Oscar consideration. This puts White Fang, in Espigares’ words, in “some kind of grey area.”

“It was always meant to be released in cinemas,” he says, “and it will be shown in movie theaters in quite a few countries around the world. The fact that Netflix has acquired White Fang for distribution via their platform in the U.S. doesn’t change that. I knew we would be able to reach a wider family audience in the U.S., people who have an endless choice of animated movies to choose from on a monthly basis, who are probably less likely to watch an animated European indie flick on their day out with the kids.”

For the director, questions about distribution or awards are not the biggest challenge he’s faced. Nor was it even the tricky task of animating realistic dogs, or even working within what he describes as “the catering budget for one month at Pixar.” Rather, it was keeping the story fresh and alive over its three-year production period. “You have all these ideas at the beginning, the way you want to tell your story, and as the director you are the only one who has the movie in his head,” he says. “During the three years, there were ideas that got lost in translation. I ended up in the situation where I said to people, ‘I told you this before,’ and they just forgot about it, because there are so many other things to think about technically.”

With one animated feature under his belt, Espigares is now looking beyond tooning. “I’m thinking of moving into live action,” he says. “I’m not burning any bridges, but I’m tempted. A couple doors have opened and some of them are in live action.”

And given that filmmaking can be a dog-eat-dog proposition, Alexandre Espigares might just have the best animation experience.

White Fang is available for streaming on Netflix in July. For more info, visit www.superprod.net/en.