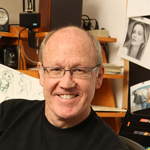 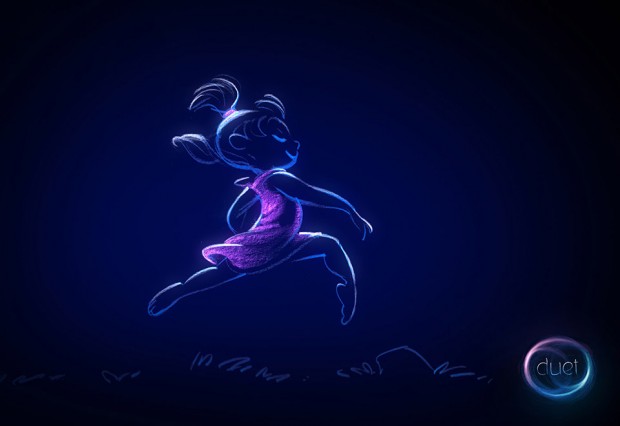 
Glen Keane had a career to which almost any animator in the world would aspire. Starting at Walt Disney Animation Studios in the 1970s, he learned the craft directly from several of Walt’s Nine Old Men and designed and animated such iconic characters as Ariel, Aladdin, Pocahontas and Rapunzel. But in 2012, the day came when Keane decided it was time to go, to create the personal and expressive art he had aspired to in his youth. 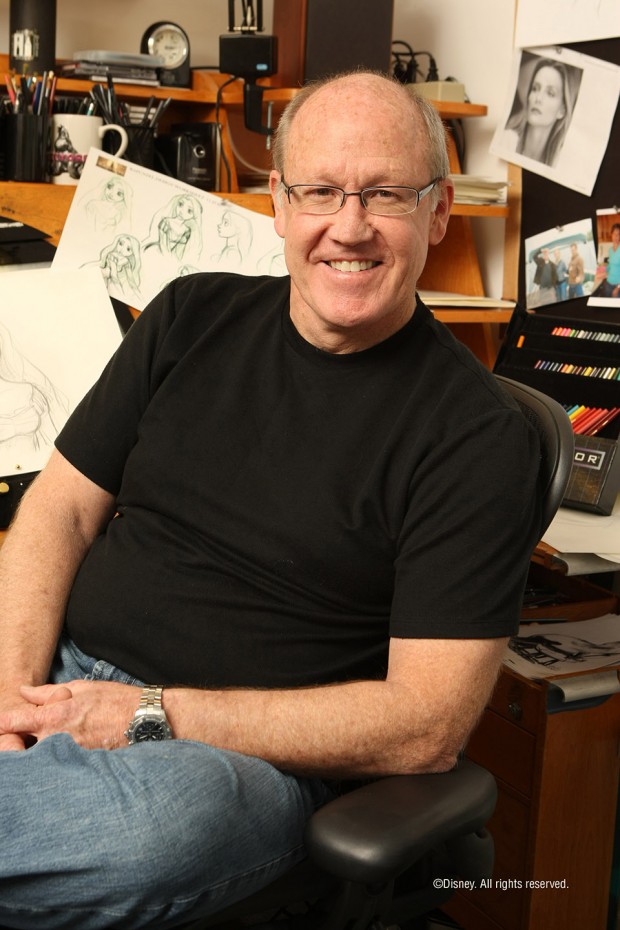 “There was always one more character that I just couldn’t not do,” says Keane of his 37-year tenure at Disney. “And pretty soon, nearly 40 years has gone by and, I think, at a certain point a bell goes off and you realize you know if you’re going to do that you better do it now while you’ve got a lot of energy. It was just the right time.”

Keane didn’t know the path he’d set out on that day would lead him to create Duet, an interactive short animated experience created in conjunction with Google’s Advanced Technology and Projects group designed to be viewed on mobile phones. Finally released exclusively in November on Motorola phones and coming soon to all mobile platforms, the linear “short-film” version of the film has been a smash-hit at festivals and made the short-list for Oscar contention.

Duet, created from drawings Keane drew in pencil on paper, tells the story of Tosh and Mia, a boy and a girl who follow different paths from birth into maturity and eventually into each other’s arms. The app allows the viewer to use the phone screen like a window into a true 360-degree 3D world and follow either character through space from start to finish on their journey. Few who have seen either version have remained untouched by the joyful emotion and sheer beauty and quality of the animation.

“There was always something in me that was always looking for that —I don’t know what it was; something personal and very expressive,” he says.

The road to making Duet was complicated, though surprisingly quick given the number of technical innovations that were required to make it a reality. The project began when conversation at a dinner with fellow animators John Kahrs, Doug Sweetland and Rodrigo Blaas turned to a new technology Sweetland was working with that allowed the audience to control the camera.

Intrigued, but needing to see it first, Keane was connected with Google ATAP, headed by VP engineering Regina Dugan, for a demo. “The purpose of (Google ATAP) is to do this skunkworks R&D department that tires to match tech at the edge of what’s possible in tech and interesting applications of the tech in general,” says Rachid El Guerrab, technical project lead for Google ATAP.

“All I could see is this is a tiny little screen,” Keane says. “I looked at it closer and realized it’s not a screen at all — it’s a window into this infinite world. You’ve got the camera and you have freedom — and yet the animation is all out there for you to follow. It seemed like such scary freedom. And I think I’ve always been drawn to the scary; I’ve been drawn to the thing that makes me feel like, wow, I could really fail at that.”


Keane had formed Glen Keane Productions and recruited his son, Max Keane, himself an animator with experience in multiple animation techniques and short-form projects like commercials, and former Disney producer Gennie Rim to the company.

“I talked to Max and he says: ‘Dad, how long has it been since you’ve animated just for the joy of it? Forget about Google. Forget about presenting to anybody. I would just like to see what you would do, just for the fun of it,’” he says. “It’s funny how you just need somebody like your own son to tell you that.”

That led Keane to just sit down and pick up a pencil and start drawing. Keane’s mind went to his grandchildren, which lead to the images that open Duet: a baby learning to crawl. A quick test animation was put together in three days and shown to the Google ATAP people, who instantly agreed to do it. “So we ended up going up to Silicon Valley and created a little animation studio in the programmers world,” Keane says.

Dugan, whose career includes served as director of the Defense Advanced Research Projects Agency, says the goal for Google was to use technology to allow people to view art in the most pure way possible. “When executed well, all the tech becomes almost invisible,” she says. “That’s what we seek: the tech in service to the story. From our perspective, when you get that combination right, work at the edge of impossible, executed at 110 percent, it’s both beautiful and badass.”

In the nine months it took to create Duet — during which Max Keane and his wife became parents themselves — Keane and crew faced considerable creative and technical challenges.

First was coming up with a story. “How do you actually plan this story when two things are going on at the same time?” says Keane. “You have to be conscious of both of them. Though you’re animating this one you know the other’s going to be coming up and meeting there and you’ve got to plan it so it just ties at just the right moment.”

His first instinct was to forget trying to plan it out and solve the problems by jumping right in to animating it. But Max Keane put the brakes on that idea and said they needed some kind of storyboard, animatic or other plan to help the rest of the team get on board.

“Everybody had an opinion and it was totally collaborative, which I think helped us in the end,” says Max. “The idea of putting everything up on storyboard on the actual device was I think really helpful for us.”

“Everyone liked the idea except me,” says Glen Keane.

Preserving the esthetic of the images as hand drawn was important at every step of the production. Rim says the “agreement with Glen from the beginning was we won’t touch any of your images, we won’t alter them, we’ll just honor them and the line.”

To which Keane says they occasionally went a little too far with. “There were little coffee stains and they’re like, ‘We’ve got to keep that,’” he says with a laugh. “But they really valued the original line and I was so happy with that.”

“Every idea presented a technical problem or dilemma of what if the viewer looks away?” says Max. “Quickly, it was apparent that this (involves) a lot more than just planning out what’s happening.”

Another major technical issue involved the backgrounds. One featured a tree that both Tosh and Mia climb and pause to look at each other. With the viewer able to look where they please, that meant the entire tree had to be created in the virtual space. Keane’s final drawing of the tree was enormous — easily large enough to cover the floor of a medium-size room.

Other background issues were a bit easier to deal with: fading in as the characters enter them and out again as they leave.

Moving Against the Grain

Yet another major technical issue was that the characters had to move through space and across stationary backgrounds — the opposite of typical animation.

“The team that was working on the 3D aspect of it — Matthew Oursbourn and Derrick Lau — they would take the animation and because Glen is animating everything in place, the character is center and the background is moving, and counter-animated it so the background was static and the characters were moving,” says Max.

El Guerrab says the biggest technical challenges were finding a way to compress the images to render on a mobile phone without losing any detail, and that with every frame being hand-drawn, it had to be able to present Keane’s pre-existing imagery properly without the flexibility offered by CG images and models.

“The creative choice was to give the audience the possibility of getting lost, which is pretty scary because you don’t want them getting lost,” says Keane. “But you want them to experience freedom. So we tried to predict movement where, if a character like Tosh is in the tree and he’s going to jump down, you don’t just surprise the audience by having him jump out. You have him looking back, like he’s looking at Mia, where she went, as he’s starting to get ready to go, he’s beginning to move down, so somewhere in your mind you know he’s going down, but he’s waited just a beat before doing it. You do little things like that so you don’t lose them.”

The characters’ meeting points were also difficult. “We figured these would be meeting points and places to choose: I’m going to follow the girl, now; I’m going to follow the boy,” says Max. “But what we realized was the speed at which they come together and cross, though it feels right and appropriate on a locked frame when you’re following it, it’s like half a second and the character’s gone. This is a different way of thinking about time and interaction of characters.”

Speaking with Keane on the day the Duet app was first released to Motorola phones, he says it was amazing to hear from people all over the world the different ways they had discovered the story, experienced it and been touched by it.

The implications of the technology behind Duet are significant, and Keane himself says it can’t help but affect his future projects. “It was wonderful to be in a world where the rules no longer applied,” he says. “What’s it going to be like when I go back to the traditional way now that I’ve learned another language? I don’t think I will just forget this. The longest scene I animated at Disney in those 40 years was maybe 20 seconds long and this was over five minutes of unbroken animation of two characters and you never felt like it was too long. I’m really curious how this is going to apply in new stories.”